The Tax Haven of Norfolk Island 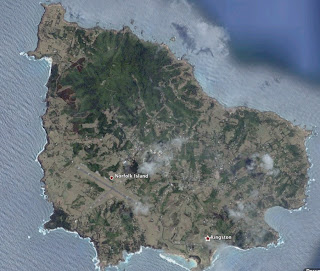 With just 13 square miles and 2,142 residents, Norfolk Island is not large. Lying 900 miles off Australia and 600 miles from New Zealand, it is also very remote. But Norfolk played a key role in the British colonization of the Austral realm. Extensive groves of tall, straight Norfolk Island pine (Araucaria heterophylla, now a common houseplant) carpeted the uninhabited island when James Cook happened upon it in 1774, as did thickets of New Zealand flax (Phormium tenax).The British Navy, concerned about the declining supply of masts from North America and hemp from Russia, took a deep interest in the island’s resources, contributing to the decision to found a settlement on the Australian mainland. Through the early 1800s, Norfolk maintained close contact with New South Wales; it too served as an early penal colony.

Although unpopulated when discovered by the British, Norfolk had been settled by Polynesians six to seven hundred years ago. It is not known what happened to the settlement – Norfolk was one of a number of Pacific islands that were only temporarily occupied by Polynesians. The Polynesians did leave their rat, however, along with an ecologically simplified island.

The human geography of Norfolk was transformed in 1856 with the arrival of 192 settlers from Pitcairn Island, a magnificently remote outpost east of French Polynesia. Pitcairn, a volcanic island slightly larger than Norfolk, had been settled in the late 1700s by the famous mutineers of the Bounty along with their Tahitian wives. It was not an idyll, with drunken violence decimating the men, but the population grew nonetheless. When the community threatened to outgrow Pitcairn, a contingent was relocated on Norfolk. Along with the settlers came their distinctive dialect, usually described as a blend of eighteenth-century English and Tahitian. Today the Norfolk language—Norfuk—has official status along with English on the island. Local officials fear that it is falling into disuse but are trying to encourage it. (To hear the language spoken, visit the Norfolk Language website.)

Norfolk is under the sovereign authority of Australia, but it is legally autonomous. The inhabitants have made money by doing the same thing that the legally autonomous islands attached to Britain (Man, Jersey, and Guernsey) have done: set themselves up as a tax haven. Norfolk’s government has further tried to leverage its autonomy into becoming an offshore banking center, but here it has found little success, as such moves have been resisted by the Australian government.

Norfolk controls its own immigration policy, demanding that Australians come with passports. It sometimes refuses permanent residency even to wealthy outsiders. According to the Wikipedia, Norfolk rejected singer Helen Reddy, despite her roots on the island. Norfolk’s anomalous geopolitical situation sometimes gets noticed in the North American news. In February 2010, The Vancouver Sun reported on its role in a complex legal battle over the estate of Eldon Foote, a Canadian-born entrepreneur and philanthropist, that pitted Foote’s widow and children against two charitable foundations. The heirs wanted to argue the case in a Canadian court, but the charities insisted “that Norfolk Island, a sun-drenched tax haven and self-governing territory of Australia, was the philanthropist’s legal home.” An Alberta judge ruled that this was the case, thwarting Foote’s wife and children.

Geopolitically anomalous islands – including Norfolk – occupy significant positions in the global financial order, serving as refuges from standard legal systems. Island governments take advantage of such irregularities, as do wealthy individuals and corporations. Whether the global economy as a whole gains from such stratagems is a different question.