The Sovereignty of Non-Sovereign Tribes = 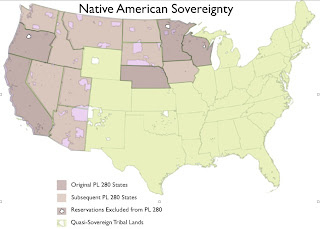 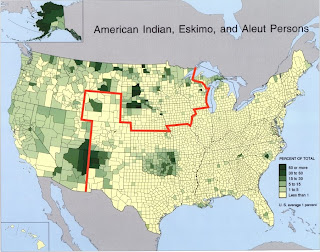 The federally recognized Native American groups of the United States are held to possess “tribal sovereignty.” The autonomy they enjoy is obviously limited, as the U.S. government maintains considerable control. But as we saw in yesterday’s post, sovereignty in practice is a divisible bundle of powers, which can be shared between a supreme political authority and its subordinate units. If the fifty U.S. states can be described as sovereign, so too can tribal governments, which usually enjoy more autonomy. (In the interests of precision, “quasi-sovereign” or “sub-sovereign” would perhaps be preferable terms, but one cannot easily change general usage.)

Native American groups were originally recognized as fully sovereign entities, able to sign treaties with other powers. As the U.S. government cemented its authority over the full extent of the territory that it claimed, they were demoted to the position of “dependent nations”: still partially autonomous, but no longer independent.

The extent to which Native American tribes today exercise sovereignty is an intricate issue, with a tangled history of court cases and acts of Congress. Tribal governments officially represent dependent nations directly subordinate to the federal government, and as such remain independent of the states and local branches of government. By a strict reading of their legal status, reservations should perhaps be mapped not as parts of states, but as autonomous territories removed from the fabric of state division.

Tribal freedom from state supervision, however, has gradually been whittled back. If Indian reservations are truly independent of the states in which they are located, then state courts should have no jurisdiction over them. Instead, both criminal and civil matters should be handled by tribal courts at the lower level and federal courts at the higher level. Such conditions obtain over much of the country, but not in the “greater northwest” (see map above). In 1953, Public Law 280 gave the governments of six states authority over certain civil and criminal matters on tribal lands that fell within their boundaries. It also allowed other states to later assume such powers if tribal governments consented. As the second map shows, most Native Americans today live in PL 280 states.

The recent development of reservation gambling was made possible by the limited sovereignty that tribal governments possess, but in practice it has further muddied the concept of tribal sovereignty. The Indian Gaming Regulatory of Act of 1988 forced tribes that wanted casinos to form “compacts” with state governments. At first such compacts were construed as business deals between autonomous and largely equivalent entities. According to the Act, if states refused to negotiate in good faith, tribes could sue in federal court. In 1991, however, the Supreme Court’s decision in Seminole Tribe v. Florida interpreted states’ “sovereign immunity,” as established in the 11th Amendment to the Constitution, as protecting them from legal action by their compact partners.

But tribal governments themselves also possess (limited) sovereign immunity. As battles over new tribal casinos rage, the scope of sovereignty continues to be scrutinized, and many Native American groups fear that their vestiges of sovereign power are being whittled away. The rhetoric can become heated. One American Indian website argued recently that the Attorney General of Connecticut has “waged a war against the doctrine of tribal sovereign immunity.”

Gambling is not the only economic issue at play. Tribal governments also benefit from selling low-tax tobacco, a business widely reviled. On March 16, 2010, Indian Country Today described the U.S. Senate as having “handing big tobacco a huge victory” by “attack[ing] tribal sovereignty and economies” when it passed the PACT Act (Prevent All Cigarette Trafficking). The Act left the Senate with unanimous consent, yet it could do significant harm to many tribal economies. American Indian leaders are now pinning their hopes on a presidential veto. According to one spokesman, “it comes down to Obama. He is an adopted Crow and he says all the right things, but this is real and not the campaign trail. So it will be interesting to see how he reacts when the rhetoric is tested against the reality of supporting tribes.”