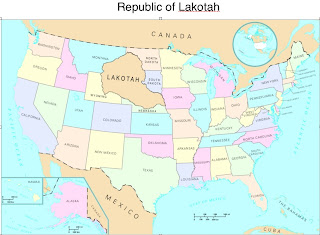 Many Native Americans are worried about the reduction of tribal sovereignty. A few are so angry at the United States that they have declared independence. In 2007, Russell Means and a few other Lakota (Sioux) activists delivered formal papers of separation in Washington, D.C. They insisted that their self-proclaimed Republic of Lakotah was not seceding from the union but reasserting its own sovereignty. The Lakota, in their view, had signed treaties of dependency as a sovereign nation; as these treaties were not honored by the United States, they were effectively annulled, restoring Lakota independence. The republic’s organizers did say that they would consider entering a Compact of Free Association with the United States, following the Marshall Islands and the Federated States of Micronesia.

In practice, the self-proclaimed Republic of Lakotah means little. The Bureau of Indian Affairs has deplored it as a publicity stunt, noting that its core members have no formal positions in tribal government. Few of the elected leaders of the eight reservations in the so-called republic have expressed support. While Russell Means claims that a sizable percentage of the Lakota people favor the declaration, others disagree. Support is even less certain among the non-Lakota Indians of “Lakotah,” and is undoubtedly extremely low among the non-indigenous people – who actually constitute the overwhelming majority of the proclaimed republic’s inhabitants.

Lakotah’s leaders sought international support, requesting recognition from Russia, France, Bolivia, and a few other countries. They have been rebuffed by all, even Venezuela. But the would-be republic has found support from two secessionist movements elsewhere in the United States: the Alaskan Independence Party, and the “Second Vermont Republic.” Such movements seeking to dismember the United States are small, but they are growing rapidly.

Modern secessionist groups in the United States are a diverse lot. Most follow a conservative-populist philosophy with libertarian tendencies – but not all. The Lakota activists are generally regarded as far left, but their politics are actually more complicated. Many of their libertarian platforms mesh well with those of the Alaskan splitters, including their support of the gold standard. The Second Vermont Republic, by contrast—founded by a former Duke University professor—is squarely leftist, “opposed to the tyranny of Corporate America.” But regardless of their divergent views, those who would secede from the union agree on one thing; they want to see the United States dismantled. To that extent, they are natural allies.