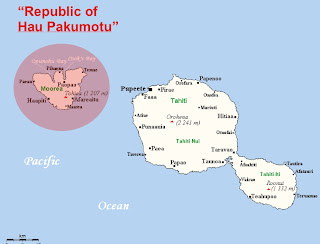 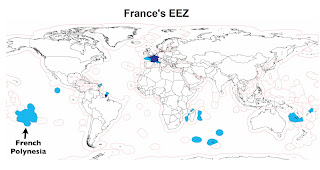 The globe-spanning European empires of the 1800s were essentially dismantled in the decades following World War II, with one important exception. In the maritime realm, empire lingers in the form of continuing colonial control over small oceanic islands, some inhabited, others not. If one includes the 200 nautical-mile exclusive economic zones that sovereign states control around their island holdings, such oceanic “empires” cover a substantial portion of the earth’s surface. As the map reproduced above shows, France’s maritime sphere is vast and far-flung, giving France a truly global reach.

France governs its various insular and oceanic territories in different ways. Some of its islands (Reunion, Guadeloupe, and Martinique) are integral units of the country, as much parts of France as Hawaii is part of the United States. Most others are organized as “overseas collectivities,” ruled in a more colonial manner. The sizable and resource-rich island of New Caledonia, however, is classified as a “sui generis collectivity”; its ties to France are structured in a unique and particularly complex manner.

While France undoubtedly exploited its colonial domains, today its vestiges of empire are more consistently subsidized. Such revenue flows, however, do not prevent chafing against the existing regime. Independence movements and other organized forms of resistance are found in most of the inhabited islands ruled by France, even Corsica. In February 2009, protests in Guadeloupe and Martinique turned deadly, forcing Paris to send in police reinforcements. Focused mostly at the high cost of living, the protests also targeted the domination of local economies by metropolitan elements.

French Polynesia, a vast oceanic expanse containing some 264,000 inhabitants, has also given France major headaches in recent years. Since 2004, this “overseas collectivity” has experienced nine changes in government, prompting Nicholas Sarkozy to describe the situation as “comical.” Pro-independence and pro-France local politicians struggle against each other, but then often join forces to direct subsidies to their own islands. Denunciations of Chinese merchants, followed by denunciations of such denunciations, are another stable feature of French Polynesian politics. As instability has increased, Paris has looked for possible reforms. In January 2010, Sarkozy proposed revamping the colony’s electoral system, but received little local support.

As is true in the French Caribbean, much of the popular discontent in French Polynesia stems from the high cost of living. Such tensions reached a climax on January 19, 2010, when opposition leaders on the island of Moorea – a favored tourist destination – publically seceded from France and French Polynesia, declaring that henceforth Moorea should be regarded as the independent republic of Hau Pakumoto. Although the announcement appears to have been largely a publicity stunt, French officials took it seriously, seizing funds and illegally issued identity cards. According to the Vancouver Sun, the minister of international affairs of the new “republic” claimed that more then 50,000 people support independence, a suspiciously high number considering the fact that Moorea’s population is only about 16,000.