“Despite Pakistan’s economic, political and social problems, … [Pakistanis] are considered to be one of the most patriotic people in the world. The people within Pakistan as well as the Pakistani disapora remain loyal and supportive of Pakistan… Most of modern-day Pakistani patriotism and nationalism is centered around a common Indo-Iranic identity and heritage of 99% of the population.” – Wikipedia, “Pakistani Nationalism.”

“That national identity remains evasive for most of us is a foregone conclusion. The Pakistani national identity, so carefully constructed over the years by the state, has largely failed to find any large scale acceptance to bridge our regional differences and shape us into one nation. It is hardly news to anybody that the people of Balochistan and interior Sindh feel alienated from the idea we call Pakistan. What is that idea of Pakistan?” – Fahd Ali, writing in Daily Times: A New Voice for a New Pakistan, July 28, 2010. 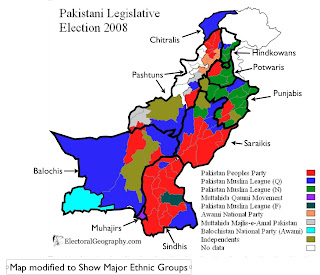 At first glance, the statements on Pakistani nationalism by Fahd Ali and the anonymous author of the Wikipedia article seem completely contradictory. Wikipedia claims that Pakistanis are among the most nationalistic people in the world; Ali isn’t fully convinced that they form a nation at all. Both positions have an element of truth. Pakistani nationalism burns strongly, but largely in an oppositional sense; fear and loathing of India bind together the people of Pakistan much more strongly than any putative “Indo-Iranic identity.” Internally, deep ethnic and religious divisions continue to threaten the county’s basic integrity.

Pakistan’s national roots do not run deep. Founded in 1947 as the national home for the Muslims of what had been British India, its population includes many post-partition migrants. Its name was contrived from an acronym,* yet its government has never controlled central Kashmir—the region that puts the “k” in “Pakistan.” The official language (Urdu) is new to this part of the subcontinent, having originally been the tongue of the Muslim population of the central Ganges Valley in India. And the country’s borders have already drastically changed once, when its eastern annex (now Bangladesh) broke away in 1971.

Pakistan’s founders tried to build a strongly centralized state that would trump regionally based sentiments and antagonisms. As Haider Nizamani explains in another recent Daily Times essay, Mohammad Ali Jinnah – father-figure of the country – denounced “‘the curse of provincialism,’ and wanted to ‘rid’ Pakistan “of this evil. … This ideal solution backed by the state’s coercive arm expects all Pakistanis to erase their Sindhi, Baloch, Punjabi and Pashtun pasts and become Pakistanis as defined by Islamabad.” Such nation-building from on high has not worked very well, Nizamani contends, for “the central government has seldom been a government that various ethno-linguistic groups could comfortably call their own.” The ethno-national sentiments of some Pakistani groups have been incorporated more successfully into a larger Pakistani nationalism than others, but none are stable. Even the Punjabis, who are widely viewed as controlling the state, often identify more closely with Punjab than with Pakistan. As Nizamani puts it, “Such are the limits of the prevailing over-centralised state of Pakistan that even Punjab will find it increasingly difficult to subsume its economic and political interests under the rubric of Pakistani nationalism.”

If Pakistan’s national cohesion is as weak as Fahd Ali and Haider Nizamani claim, one ought to see evidence in voting patterns. In countries in which regional affiliation outweighs national solidarity, electoral returns are generally highly skewed, with different areas strongly supporting their own candidates. Regionally focused political parties also tend to thrive in such circumstances.

It is thus striking that the map of Pakistan’s 2008 election appears to show little regional variation, with all the major parties remaining nationally competitive. Both the secular, quasi-socialist Pakistan Peoples Party and the various splinter groups of the moderately Islamist Muslim League campaigned successfully across provincial and ethnic lines. (The accompanying map is derived from the invaluable website, ElectoralGeography.com; I have superimposed some of the country’s more significant ethnic divisions on the original.)

Closer inspection, however, reveals significant rends in the national fabric. The Muttahida Qaumi Movement (MQM), Pakistan’s only socially liberal party, took Karachi – the country’s largest city (population 18.5 million) and financial core – but triumphed nowhere else. MQM’s uneven returns were hardly unexpected, as the party is closely associated with the Muhajirs, Urdu-speaking post-partition immigrants from northern India who came to dominate Karachi, and who struggle against the mega-city’s other ethnic groups, particularly the Pashtuns. A Balochi nationalist party, moreover, took one of Balochistan’s most important districts, while the historically Pashtun-nationalist Awami Party triumphed in a number of districts in the northwest. The extreme Islamist party Muttahida Majlis-e-Amal won the majority of votes in several other Pashtun parts of the country.

The evidence from the electoral map is merely suggestive, but it does indicate that national consolidation in Pakistan remains partial and insecure. With several ethnic and regional “nationalisms,” as well as anti-national extreme Islamism, challenging state-oriented nationalism, Pakistani identity must rely on solidarity against foreign enemies, real or imagined. Fahd Ali frames the resulting dynamics in terms of conspiratorial beliefs:

“The creation of Pakistan is almost articulated as a divine intervention or at least something that had divine patronage. As per this theory, Pakistani Muslims must then prepare themselves to fight against a host of conspirators who are there to harm them. These conspirators usually appear in the form of American Imperialism and Hindu Zionism (sic) that are eagerly helped by the ‘real’ Zionist, aka the Israeli state. All three forces are conspiring against not just a Muslim nation but also against a nation-state that was founded as the last bastion of Islam.”

To the extent that Pakistan’s nationalism derives less from the internal solidarity of the Pakistani people than from their opposition to other states, militarism becomes integral to its functioning—and peace between India and Pakistan becomes highly unlikely. Without the Indian threat, Pakistan could easily collapse into a number of hostile states.