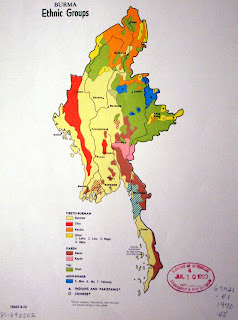 The standard linguistic map of Burma/Myanmar (below) reveals a significant number of ethnic groups. Unfortunately, it also conceals much of the country’s diversity, as a number of separate peoples are joined together into composite ethnic categories, while others are simply ignored. The most important group in the latter category are the Rohingyas, a distinct people some 700,000 strong who appear on few maps of Burma. In the map on the left, the Rohingyas are marked, but in a manner that effectively erases their identity: the two triangles in far western Burma indicate Rohingya areas, but label them as “Indians and Pakistanis.” This erasure of Rohingya identity is in keeping with official Burmese policy, which has denied almost all of them Burmese citizenship.

The Rohingyas speak an Indo-European language closely related to Bengali. Like most eastern Bengali speakers, they follow Islam – the main reason for their persecution by the resolutely Buddhist Burmese state. According to Rohingya history, their ancestors began moving to their current homeland as early as the 7th century; Burmese historians contend that they did not arrive until after Burma was conquered by the British, and that they came largely through British connivance. As a result, hard-core Burmese nationalists insist that the Rohingyas be regarded as citizens of Bangladesh, not Burma. Bangladesh, not surprisingly, rejects this interpretation. 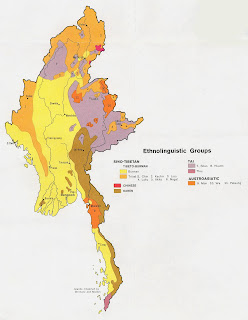 The persecution of the Rohingya has been going on for some time. In 1942, after Japanese forces expelled the British from Burma, mob violence took an estimated 100,000 Rohingya lives. In the late 1970s, renewed harassment sent another 250,000 to Bangladesh, where many have continued to languish in wretched refugee camps. Rohingyas continue to flee Burma, even though they have no place to go. In early 2009, the Thai military reportedly towed a number of boats crammed with Rohingya refugees into the open sea, where large numbers perished in storms.

Bangladeshi authorities reject Rohingya migration, arguing that all Rohingyas who entered their country after 1991 are simply illegal immigrants. Tensions between Burma and Bangladesh mounted in the fall of 2009, focused both on the Rohingya issue and on the maritime border between the two countries. The offshore area contains significant energy resources that both countries wish to exploit.

In late December 2009, the two countries reached a provisional agreement that involved the “repatriation” of Rohingya refugees. Burma agreed to accept 9,000 out of the estimated 28,000 residing in refugee camps (an additional 300,000 to 400,000 Rohingyas currently live in Bangladesh outside of the camps). But few of the refugees are eager to return. The journalist Nurul Islam, reporting in Media Matters, quotes one Rohingya man as saying, “we don’t have any rights in Myanmar. … If we go back, the armed forces will use us as bonded labour. Many will be sent to jail. There are still curbs on practising our religion or movement from one place to another without the army’s permission” (see http://usa.mediamonitors.net/content/view/full/70036).

All in all, few of the world’s peoples have suffered discrimination as severe as that experienced by the Rohingyas. Yet their plight rarely gains attention in the U.S. media.