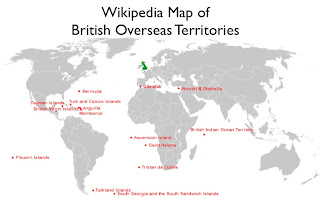 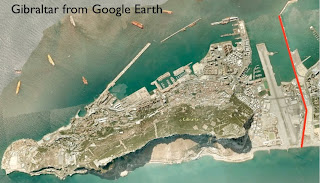 Gibraltar’s position as a British Overseas Territory makes it a geopolitical anomaly. Britain’s scattered overseas colonial remnants are under the sovereignty of the United Kingdom but are not part of it*. Since the passage of the British Overseas Territories Act of 2002 their inhabitants have enjoyed full British citizenship, but they are not under the rule of English law. Perhaps most confusingly, all of the UK’s fourteen overseas territories enjoy “concurrent European Union citizenship, giving them rights of free movement across all EU member states.” But only Gibraltar is in the EU, yet it not within the EU customs union, and it does not possess EU membership in its own right.

Anomalous geopolitical situations often generate both opportunities and disputes. Taxes are generally kept low, partly to maintain local popularity of the foreign regime, but this has the side effect of encouraging both trade and smuggling. Neighboring countries often resent not just the smuggling but the sheer persistence of such foreign bases. As we have seen in previous postings, Spain claims Gibraltar and Argentina demands both the Falkland Islands (Malvinas) and the South Georgia group; in addition, both Mauritius and Seychelles lay claim to the British Indian Ocean Territory, the most important island of which — Diego Garcia — is leased to the United States military.

Isolation from Britain, proximity to other lands, historical openness to migration, and geopolitical distinctiveness have all helped nurture cultural particularities in the UK’s Overseas Territories. Idiosyncratic forms of speech are common, and Gibraltar is no exception. Gibraltarians are called “Llanitos,” a term of uncertain provenance that also refers to the peninsula’s dialect — if indeed the local language merits that designation. From the limited number of sources that I could find, Llanito appears to be a variety of the Spanish dialect of Andalusian that employs a number of English and other foreign expressions. Llanito-speakers often alternate rapidly between English and Spanish, a practice known as “code-switching.” Llanito is seldom written, but it does have its own dictionary, and several BBC programs have been aired in it. Llanito is influenced by Haketia (or Western Ladino), a Hebrew- and Moroccan-Arabic-influenced form of archaic Spanish spoken by Jews whose ancestors fled across the Strait of Gibraltar after being expelled by Spain in 1492. After Britain gained Gibraltar in the early 1700s, a Jewish community reestablished itself, bringing its language and other cultural practices. The Treaty of Utrecht, by which Spain ceded Gibraltar to Britain, expressly forbade the immigration of Jews; the fact that Britain ignored this stipulation forms one of grounds that Spain historically used for demanding the return of the Rock.

The 30,000 inhabitants of Gibraltar have mixed ethnic origins as well as linguistic practices. Judging from surnames, roughly a quarter of Gibraltar’s population is of British derivation, another quarter Spanish, and about a fifth Italian; others sources include Morocco, Portugal, and India. Such diversity is notable for a territory that encompasses a mere 2.7 square miles (6.8 square kilometers), forty percent of which is a nature reserve focused on the uninhabited Rock of Gibraltar. Over the centuries, the various peoples of the peninsula have largely melded into their own ethnic group. They have found communal cohesion in their desire to maintain the status quo and resist incorporation into Spain. According to the Wikipedia, Gibraltar’s voters rejected joint sovereignty with Spain in 2002 by a margin of 99 percent, an unprecedented figure, to my knowledge, in a free election.

The people of Gibraltar are not the only members of Britain’s Overseas Territories to have been concerned about possible abandonment by London. A recent article from the Turks and Caicos Islands, a British Caribbean territory, relates mounting fears last year that the previous Labor government “would have happily ended Britain’s relationship with its Overseas Territories, leaving them to fend for themselves.” The article went on to express relief that the current administration, and especially deputy Prime Minister Nick Clegg, believes that Turks and Caicos “matters greatly” to the British government, and that “Britain and its people have a duty to look after the interests of all of its Overseas Territories.”

Although many people would like to see the final dismantling of the British Empire, such a sentiment is shared by scant few of the inhabitants of its remnant possessions. For them, living in an overseas territory means not exploitation and colonization, but security, special tax and passport privileges, and economic subsidies. The endgame of empire is nothing if not ironic.

*As an additional note of complexity, the Overseas Territories are not the only places that are under but not part of the United Kingdom; the same is true of the Crown Dependencies — the Channel Islands and the Isle of Man — which have a particularly convoluted constitutional relationship with the British government. The Channel Islands are also of note for the name of their two subdivisions, focused on the two main islands: the Bailiwick of Guernsey and the Bailiwick of Jersey. A bailiwick was the domain of the bailiff, a legal officer appointed by the king, such as a sheriff.