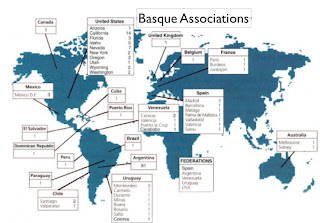 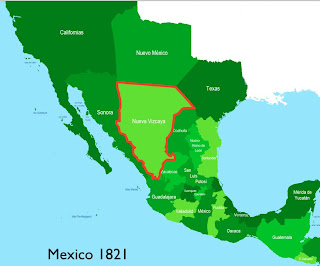 The Basques are not a particularly numerous people, totaling only around two and half million in Spain and another 250,000 in France. But millions more in other countries trace their ancestry to the Basque homeland once known as Vasconia. Basques were disproportionally represented in the Spanish colonial enterprise, with large numbers crossing the Atlantic to settle in the Americas. Chile in particular saw massive immigration, with Basques accounting for almost one-third of the Chilean population by the late 1700s. As the Basque intellectual Miguel de Unamuno quipped, “There are at least two things that clearly can be attributed to the Basques: the Society of Jesus and the Republic of Chile.” (Ignatius of Loyola, founder of the Jesuits, and Francis Xavier, the society’s best-known missionary, were Basques.) Basques also settled heavily in northern Mexico; at the end of the Spanish colonial period, not coincidentally, much of the region was called “Nueva [New] Vizcaya.”

Basques were even influential in the Philippines, a Spanish colony that received very few Spanish immigrants. Both Miguel López de Legazpi, the conquistador of the archipelago, and Andrés de Urdaneta, the navigator who charted the course between New Spain (Mexico) and the Philippines, were Basques. The oldest and largest business conglomerate in the country, the Ayala Group, was founded by Basque immigrants. Marciano de Borja argues in Basques in the Philippines (University of Nevada Press, 2005) that the economic development of the country depended crucially on Basque talent, capital, and entrepreneurship.

Basque participation in maritime endeavors predates the incorporation of the Basque country into Spain. The Kingdom of Navarre is described in the Wikipedia as having been a thalassocracy, or sea-based state. Adventurers from Navarre gained holdings in the eastern Mediterranean in the late 1300s, and Basque fishermen were exploiting the immense cod fisheries of the Grand Banks off the coast of eastern Canada in the 1400s. By the beginning of the 1500s, the Kingdom of Navarre ran outposts on Newfoundland Island. Basque whalers may have “discovered America” well before Columbus.

Vasconia’s historical position is anomalous: a small country annexed by a much larger neighbor that then became central to the larger state’s global colonial enterprise. One other country shares this distinction: Scotland. Scotland lost its independence in 1707, when it joined England to form the United Kingdom. The merger was not entirely of Scotland’s choosing, as Scottish finances were in ruins after the ill-fated Darien expedition tried to wrest the Isthmus of Panama from Spain and thus found a Scottish empire. Scots were subsequently over-represented in most British colonies, just as Basques were in Spain’s colonies. And central Scotland, like central Vasconia, emerged as a hub of shipbuilding and other industrial activities.

Scotland’s shotgun wedding with England led its intellectuals to reconsider the position of their country. According to Arthur Herman in How the Scots Invented the Modern World, the shock of losing independence contributed to the remarkable outpouring of intellectual activity known as the Scottish Enlightenment. The ideas of such Scottish thinkers as David Hume and Adam Smith, Herman argues, were crucial to the development of modernity. Perhaps something similar occurred with the incorporation of the Basque Country into Spain. Although Unamuno no doubt exaggerated the role of the Basques in the creation of the Jesuit order, he was on to something. For the Jesuits too contributed crucially to the making of the modern world, bridging the intellectual spheres of Europe and East Asia and introducing Confucian ideas of meritocracy to the West.

Scotland and the Basque Country today occupy similar geopolitical positions. Both are non-sovereign, autonomous territorial units with strong but not overwhelming demands for independence. Both gained their own parliaments in the late twentieth century: the Basque Country in 1978, Scotland in 1998.

Electorally, the Basque Country is a bit more nationalistic than Scotland. In the Scottish parliamentary election of 2007, the Scottish National Party received 32.9 percent of the vote, while the three main British Parties received a combined total of 64 percent. In the Basque Autonomous Community parliamentary election of 2009, the two main Spanish parties received 45 percent of the vote, with most of the rest going to Basque parties. The Basque National Party received 38.5 percent of the vote, 6 percent went to Aralar (a non-violent leftist nationalist group), and 3 percent went to Eusko Alkartasuna (a social-democratic party), putting the nationalist total at almost half. Yet Vasconia is also home to a small but growing pan-Spanish movement led by intellectuals who have become disgusted with the excesses of local nationalists. Formed in 2007, the staunchly anti-regionalist party known as Union, Progress, and Democracy received two percent of the vote in the most recent election in the Basque Country itself, and in Spain’s European parliamentary election of 2009 it received almost half a million votes. The leaders of this party are mostly Basques. Its founder, the Basque philosopher Fernando Savater, is an ardent anglophile and defender of the Enlightenment tradition.