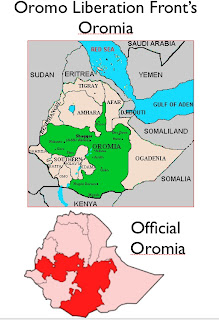 The Kurds, who number some 30 million, are often describes as the world’s largest nation without a state of their own. They have also often been depicted as a “forgotten people,” generally overlooked by the global media. Yet the Oromo of Ethiopia and environs also number some 30 million, and they too have national aspiration. And if the Kurds have been “forgotten,” how might one characterize the Oromo?: “Never noticed in the first place?”

Although the Oromo have been granted a supposedly autonomous region in Ethiopia, Oromo nationalists demand independence. They also want additional territory. As can be seen in the maps above, the territorial claims of the Oromo Liberation Front are substantially larger than Ethiopia’s actual Oromia region. Thus even if Ethiopia were to grant Oromia independence (admittedly, an all but unthinkable occurrence), the conflict would probably persist. Ethiopia’s granting of independence to Eritrea in 1992, after all, did not bring peace, as the two countries continued to struggle over border districts. 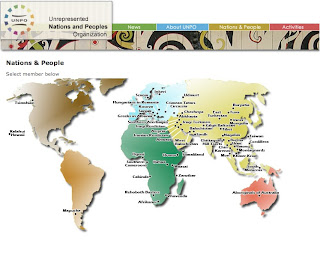 The Oromo Liberation Front (OLF) is officially classified by the Ethiopian government as a terrorist organization. The OLF itself, with office in Washington D.C. and Berlin, maintains that it is democratic and non-violent, dedicated to the peaceful self-determination of the Oromo people. Critics, however, charge the OLF with violent rebellion, targeting Amhara people in Oromo areas, and making common cause with Islamist radicals in Somalia.

If the Oromo Liberation Front is indeed a militant group, its status in the Unrecognized Nations and Peoples Organization (UNPO) could be jeopardized. UNPO (which has no connection with the UN) is an international organization dedicated to providing a political platform for self-proclaimed nations that remain under the domination of recognized states. Member organization must pledge to uphold democratic pluralism and non-violence. The Oromo Liberation Front has been a member since 2004.

The Unrecognized Nations and Peoples Organization had a fortuitous beginning. Initiated in Estonia in 1990, it gained additional support from Latvia, Georgia, Armenia and 11 other self-proclaimed nations without states. The collapse of the Soviet Union brought independence to four of the founding members the next year. Other groups joined, however, and the organization grew. It now boasts 54 active members: another five groups have been suspended, and 16 have withdrawn or been discontinued. Based in The Hague, the UNPO functions as a kind of para-United Nations, seeking a parallel path to international legitimacy for peoples excluded from the state-based international order.

The member organizations of the UNPO make unusual bedfellows. They include everything from the Tibetan Government in Exile to actually independent governments that have been denied international recognition (Somaliland), to European cultural groups that ended up on the wrong side of political boundaries (the former Danes of Southern Sweden), to small tribal federations such as the Tsimshian* of British Colombia, to the entire Aboriginal population of Australia (officially represented by the National Committee to Defend Black Rights), to the Afrikaans-speaking White population of South Africa. The organization’s position on the Afrikaner group is unambiguous: “The UNPO promotes the participation of the Freedom Front Plus within the democratic framework of South Africa, and recognizes the need of the Afrikaners to politically defend their linguistic and cultural rights. The UNPO further believes in the importance for all South African minorities, including the Afrikaners, to peacefully coexist in the ethnically varied context of South Africa, reiterating UNPO’s condemnation of any discrimination and targeted violence that takes place against the Afrikaners or any of the other ethnic minorities in the country.”