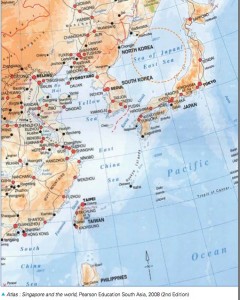 The South Korean government was severely disappointed by the April 2012 meeting of the International Hydrographic Organization (IHO), as the global body responsible for standardizing the world’s maritime place-names declined to change the name of the sea sandwiched between Korea and Japan. The IHO will continue to refer to this stretch of the ocean as the “Sea of Japan,” a name regarded by most Koreans as an unjust colonialist construct. The South Korean government does not officially object to the term “Sea of Japan” per se, but it does request that sea in question also be labeled the “East Sea,” the direct English translation of the Korean Dong-hae. (North Korea favors the more nationalistically “East Sea of Korea.”) Koreans are also irritated by the fact that the government of the United States, following its Board on Geographical Names, continues to use “Sea of Japan.” The U.S. military follows suit, resulting in what Stars and Stripes recently called a “rare public disagreement between South Korea and the U.S. military.”

The IHO will not be able to reconsider the Korean request until it meets again in 2017. In the meantime, the South Korean government has been lobbying media outlets—including lowly geography blogs—to use the dual formulation “Sea of Japan/East Sea.” A number of prominent publications now employ both terms, including the National Geographic Society, Rand McNally, The Economist, CNN, The Wall Street Journal, and Le Monde. As the booklet entitled The East Sea in Maps, published by South Korea’s Northeast Asia History Foundation, specifies, more than sixty European-language atlases now use both terms. The booklet also outlines the main arguments for the proposed change:

The Korean position makes historical sense, and the request to use both names seems reasonable enough. As a result, I have decided to use both terms in my own writing. But I am also off-put by the vehemence expressed by some Koreans over this issue. A gorgeous $20,000 globe in Stanford’s main library, for example, has been defaced by a Korean partisan who scratched out “Sea of Japan” and penned in “East Sea.”

Frustrated that international and foreign governmental institutions have not made the requested change, some Koreans have advocated more pointed terms, such as “Sea of Korea,” suggested by South Korean Foreign Minister Kim Sung-hwan. In 2006, the president Roh Moo-hyun of South Korea proposed to Japanese Prime Minister Shinzō Abe that both names be dropped in favor of more accommodating alternatives, such as “Sea of Peace” or “Sea of Friendship,” but he was rebuffed. In the meantime, partisans of both “East Sea” and “Sea of Japan” continue to scrutinize old maps, nautical charts, and geography texts, looking for precedents supposedly established by the early use their favored terms.

It is perhaps not surprising that the Korean efforts to effect a name-change have often been frustrated. Most countries, as well as most international organizations, are reluctant to change the names of any large geographical features. Switching long-established terms is a cumbersome exercise, and most people like to employ familiar words. More specific objections have also been raised. Some argue that the term “East Sea” is potentially ambiguous, as a number of water-bodies are so designated in a variety of local languages. Concerns have also been expressed about setting a precedent that could result in the increased politicization of geographical names.

Such politicization does seem to be occurring. The Philippines now officially rejects the term “South China Sea,” and instead insists on “West Philippine Sea.” More contentious is the dispute over the name of the water-body located between Iran and the Arabian Peninsula, which is generally called the “Persian Gulf” in international circles, but which most Arabs refer to as the “Arabian Gulf.” As a previous GeoCurrents post noted, the resulting dispute is often heated. Judging from reader’s comments on this and other blogs, it can be difficult for disinterested observers to avoid giving offense in such circumstance: if “Persian Gulf” offends most Arabs, “Arabian Gulf” offends most Iranians, while the compromise “Persian/Arabian Gulf” alternative would likely irritate both groups. As a result, some writers simply call this body of water “the Gulf,” sacrificing geographical precision in favor of innocuous discourse.

However such nomenclatural disputes play out, the quest to find a solution through historical research in cartographic archives seems quixotic. The names of most water-bodies have changed on numerous occasions in the Western geographical tradition alone, as the creation of standardized, internationally recognized names for major geographical features is a relatively recent development. Even the names of the oceans were historically unstable, as were the lines of division separating one ocean and another. In the 1700s, for example, many European cartographers applied the term “Ethiopian Ocean” to the entire expanse of water that wrapped around southern Africa, extending from what we now call the South Atlantic Ocean to the western Indian Ocean. So too the differentiation between seas and oceans was not fixed until the nineteenth century. In the early modern period, even British cartographers commonly labeled the water-body to the east of Britain as the “German Ocean.” Intriguingly, in switching to the modern term “North Sea,” they retained a continental orientation, as from a British perspective the most appropriate label would be—again—“East Sea.” By the same token, the use of the term “Irish Sea” for the waters between Britain and Ireland has never generated much controversy in the United Kingdom.

The British are unperturbed by the term “Irish Sea” for the same reason that few residents of the United States are angered by the term “Gulf of Mexico”: the hostility between the countries in question is largely a thing of the past, while the names of the particular water-bodies are linked to the names of the less powerful states of each pair, and thus cannot be construed as conveying the legacy of imperialism. If the Irish Sea were called the “British Sea” by the IHO, would the Irish object? Perhaps. Admittedly, a much-derided proposal was recently made in the Mississippi state legislature to rename the Gulf of Mexico the “Gulf of America,” but it turns out that the measure was a tongue-in-cheek effort “to mock other bills that would crack down on illegal immigration.”

Besides the examples given above, roughly a dozen major bodies of water share their official, IHO-sanctioned names with those of sovereign states: Argentine Sea, Gulf of Guinea, Gulf of Finland, Gulf of Venezuela, Libyan Sea, Norwegian Sea, Mozambique Channel, East China Sea, Gulf of Thailand, Philippine Sea, and Indian Ocean.* To my knowledge, none of these names is particularly controversial. If memory serves correctly, a few Indonesians have expressed dissatisfaction with the term “Indian Ocean,” arguing instead that this body of water be called the “Indonesian Ocean,” but I have not been able to find confirmation. If such an objection has indeed been made, it is rather ironic, as the name “Indonesia” itself literally means—in Greek—the “Islands of India.”

*Other sea-names close to matching this criterion, such as Timor Sea, but do not quite fulfill it.