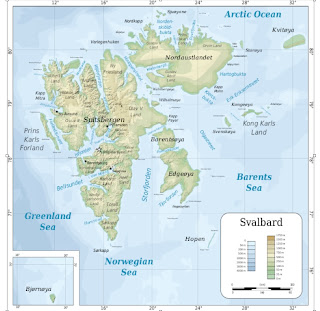 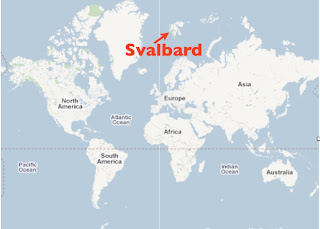 The arctic archipelago of Svalbard is prominent on Mercator-projection world maps and figures as well in most pull-down geographical menus. Svalbard is also plenty interesting in its own right. News stories about the archipelago often focus on either its high-tech seed bank or its polar bears. The Svalbard Global Seed Vault was recently described by grist as something like “an external hard drive, [that] stores ‘backup’ copies of seeds for one-third of all crop varieties.” By some accounts, Svalbard supports more polar bears (3,000) than humans (2,700). Both Svalbard and its ursine inhabitants are perhaps best known from their portrayal in Phillip Pullman’s fantasy trilogy, His Dark Materials.

Svalbard, about the size of Sri Lanka or Tasmania, is also notable for its geopolitical anomalies. The coal-rich archipelago came to Norway through the Svalbard Treaty of 1920. The treaty, signed* by the United States, Denmark, France, Italy, Japan, the Netherlands, Norway, and Sweden, ostensibly granted Norway “full and absolute sovereignty” over the entire landmass. Svalbard, the Wikipedia stresses, is not a dependency of Norway, but is fully part of the kingdom. In actuality, the situation is more complicated. Norway’s sovereignty over Svalbard is limited and the islands remain legally distinct from the mainland. Norwegian tax laws, for example, do not apply to Svalbard, and immigration rules compromise Norwegian dominion. The 1920 treaty stipulates that residents of all countries are entitled to residency in Svalbard and are granted the right to establish commercial enterprises. In terms of residency potential, the archipelago is something of a global commons.

Several foreign communities have taken advantage of Svalbard’s open borders. The islands have long supported a significant Russian population. A Russian state-owned coal company maintains Svalbard’s second largest settlement, Barentsburg, population 500 or so. Coal mining is no longer very profitable, however, and thus requires heavy subsidies from Moscow. Oddly, Thais form the second largest foreign group. In the 1970s, evidently, a number of local miners took a tropical vacation, several returning with Thai wives. Other citizens of Thailand followed, attracted by Svalbard’s relatively high wages. According to a recent story, the local supermarket “now has an ‘Asian corner’ with rice, chilies, soy and fish sauce and other Thai condiments.”

Despite its open-door policy, Svalbard does not present an easy migration option. Bitter winter cold and months of darkness, as well as an average July high temperature of 45 degrees F (7 degrees C), deter would-be immigrants. So too does official policy; welfare is not provided, and anyone without a job and a place to stay can be summarily deported. Svalbard also lacks local democracy. The governor of the archipelago, who also acts as police chief, is appointed by Oslo. Building regulations are extremely strict, and most land is devoted to nature reserves. Other oddities abound, as summarized on a libertarian website whose enthusiasts were eyeing Svalbard as a potential “European Freestate.” According to commentator Joffeloff, “outside the settlements it’s illegal to not carry a gun; inside the settlements you had better get it away quickly because then you are suddenly an unaccountable madman, guilty until proven innocent just like on the mainland.” (Guns are to be carried outside of the settlements for protection against bears.)

Svalbard is also the site of a significant international arctic research station, located at Ny-Ålesund. According to the Wikipedia, Ny-Ålesund is the “world’s northernmost functional public settlement.” In 2008, India became the eleventh country to establish a research facility at the settlement.

*A number of other countries later signed the treaty, which Wikipedia has actually mapped. Despite my enthusiasm for mapping, I have to say that this takes it a bit far. Is there really any significance to the fact that Afghanistan has signed the Svalbard Treaty, but Iran has not? People from non-signatory countries have the same right to move to Svalbard as citizens of signatory countries.