The New State of Coastal California? 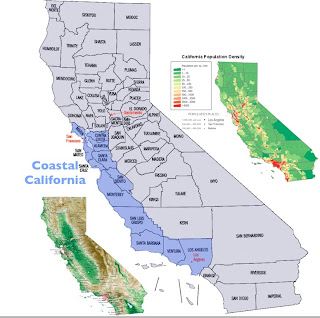 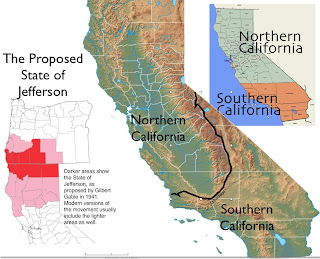 In 2009, former California legislator Bill Maze proposed dividing his state, hiving off thirteen counties as Coastal (or Western) California (see map). Maze, a conservative from the agricultural Central Valley, objects to the domination of state politics by the left-leaning Los Angeles and San Francisco metropolitan areas. The initial impetus for his proposal was the passage by state voters in 2008 of Proposition 2, requiring larger pens and cages for farm animals. Agricultural interests denounced the measure, arguing that it would increase their costs and threaten their livelihoods. Meanwhile, the state’s on-going water crisis, which largely pits farmers against environmentalists, widens the divide. Unforgiving invective marks both sides of the debate. A post in Politics Daily characterized secessionist farmers as dolts fighting against “liberal Hollywood types [who] don’t understand the importance of torturing animals.” The Downsize California website, on the other side, fulminates against coastal “radicals” who are “infatuated with nature over mankind and are sympathetic to illegals and criminals.”

The desire to divide unwieldy California may be quixotic but it is nothing new; at least 27 divisional schemes have been proposed since statehood in 1850. Most have sought to split the state along north-south lines. In the mid 1800s, southern California secessionists felt marginalized and ill-served by a state government based in the distant Sacramento. By the mid 1900s, the tables had been turned, as northern Californians came to resent the demographically and economically dominant greater Los Angeles (LA) area. The California State Water Project, with its vast pipes snaking over the Tehachapi Mountains, was a particular irritant. As a child growing up in northern California’s Bay Area in the 1960s, I almost never heard positive statements about LA, which was widely condemned as a vast suburban wasteland inhabited by shallow people scheming to “steal our water.” Such naked regional bigotry was spouted by people who would have been ashamed to say anything remotely smacking of racial or religious prejudice.

Economic and political evolution, coupled with substantial immigration and emigration, gradually reduced the tensions between the Los Angeles and San Francisco metropolitan areas while accentuating the division between urban coastal and interior agricultural regions. But as the 2004 “voter index map” reproduced above shows, the state’s actual political divide is far more complex than that. Close inspection reveals a Democratic voting zone essentially split between coastal northern California and the Los Angeles area, with a few interior outliers in college towns, urban cores, Hispanic rural areas, and mountainous recreation sites.Contrasting to this area is a spatially larger and more contiguous but demographically smaller Republican-voting block covering the rest of the state.

Maze’s scheme places several relatively conservative counties (Ventura, San Luis Obispo) in liberal Coastal California, doing so largely for reasons of geographical contiguity. Less explicable is his exclusion of the left-voting northern coastal countries of Sonoma, Mendocino, and Humboldt. These may be relatively rural counties, but where the main crops are wine grapes and marijuana one should not expect conservative voting patterns. Note that certainly highly rural and relatively remote regions have solidly left electoral records, an unusual pattern. These include the Big Sur coast in Monterrey County, with its artistic heritage, and the counter-cultural “hippy” centers of Mendocino and southern Humboldt counties, such as Willits and Garberville.