The Nations of Rugby; The World of Rugby 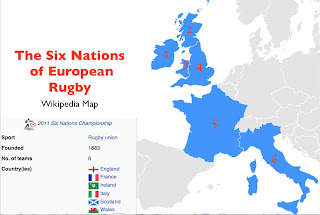 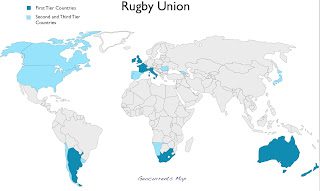 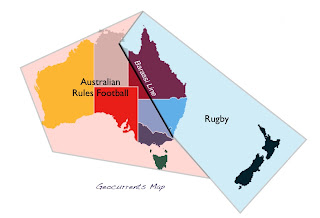 The significance of sports in structuring modern geographical relations is underappreciated by scholars. People, men especially, tend to bond with places through their identification with athletic teams. Following sports also teaches geography; as teams travel, so do their fans, vicariously. Even matters of geopolitical import can be initiated on the playing field. In 1969, a brief war between Honduras and El Salvador –La guerra del fútbol – was sparked by a soccer contest. Several years later, the United States and China began to normalize their relationship over table-tennis tournaments, engaging in “ping-pong diplomacy.”

The organization of athletic conferences also sheds light on basic geographical categorization. The geographical units of sports are often distinctive, even at the national level: two-thirds of the “nations” – and “countries” – of European rugby union* are not nations at all as the term is most commonly understood. Three are subdivisions – “constituent countries” – of the United Kingdom: England, Scotland, and Wales. The fourth is as an amalgam, composed of one sovereign state (the Republic of Ireland) and another division of the U.K. (Northern Ireland).

The global distribution of sports partially reflects historical patterns of imperial rule. The cricket-playing world, as we will see later, largely follows the map of the late 19th century British Empire. In the case of rugby, a game formalized in an English boarding school of the same name, such linkages are not as obvious. Settler colonies certainly show up, especially South Africa, New Zealand, and Australia. Invisible on the map are the game’s ties to the British colonial sphere in the Pacific; Rugby is the most popular sport in Fiji, Samoa, and Tonga. The prevalence of rugby in Argentina is also connected to colonialism of a sort, as British investments in the country a hundred years age were so extensive that Argentina is often considered to have been part of Britain’s informal empire. But rugby did not spread to all British colonies, being little played in South Asia, the Caribbean, and the Anglophone parts of tropical Africa. Other countries, moreover, adopted rugby without a colonial connection to Britain. The game’s popularity in Georgia evidently stems from its similarities to an indigenous Georgian game.

Sport affiliations can divide countries as well as connect them. Australia, for example, is split by the so-called Barassi Line into two winter-sports zones. South and west of the line, Australian rules football dominates, whereas to the north and east, rugby rules. New South Wales and Queensland are thus linked to New Zealand in this regard rather than to the rest of Australia. But that could be changing. A November 9, 2010 article in the Otago Daily Times claims that Australian rules football is spreading in South Island New Zealand.

Australian rules football is rooted in, and quite similar to, Ireland’s Gaelic football. Irish and Australian football teams regularly play each other, but they have to adjust their rule to do so. The result in a hybrid game called “international rules football.” It too is spreading; October 23, 2010, saw the first match of such “compromise” football in Malmö, Sweden.