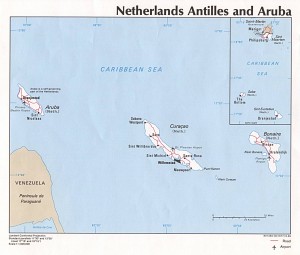 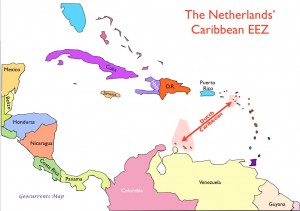 Like the unrest in Turks and Caicos, the dissolution of the Netherlands Antilles has been little mentioned in the press. Indeed, an internet search under that name would lead one to believe it still exists, given the continuing stories on its sports teams, economy, maritime boundaries, and tourism prospects. Yet the Netherlands Antilles was officially disbanded half a year ago, on October 10, 2010. The six Dutch Caribbean islands now have independent relations with the Netherlands: three as “special municipalities,” and three as “constituent countries.”

The Netherlands Antilles was always a geographically and culturally awkward place. Its core originally consisted of the three “ABC” islands—Aruba, Bonaire, and Curaçao—lying off the Venezuelan coast. Having maintained close relations with the mainland, these islands developed a Portuguese-based language called Papiamentu (in Aruba, Papiamento). The remaining Dutch Antilles—Saba, Saint Eustatius (“Statia”), and Sint Maarten—lie far to the northeast in the Leeward Islands of the Lesser Antilles. Here the basic language is a Creole form of English. The northern islands are much smaller; Saba covers five square miles (thirteen square kilometers) and is home to fewer than 2,000 people, whereas Curaçao covers 171 square miles (444 square kilometers) and is home to more than 142,000. Sint Maarten is the giant of the northern Dutch possessions, with 37,000 people on thirteen square miles (thirty-four square kilometers), yet it covers only half of the island on which it is located; the rest forms the French “overseas collectivity” of Saint Martin.

During the Cold War, the Netherlands planned on relinquishing its holdings in the Caribbean to a single new country. Such plans were complicated by the historical enmity between Aruba and Curaçao, the most populous of the islands. Aruba had long agitated for separation from the Dutch Antilles, a status that it gained in 1986, with a provision that it would advance to full independence a decade later. But most Arubans, like most other residents of the Dutch Caribbean, soured on the notion of independence as they witnessed the political and economic turmoil that followed the gaining of sovereignty by the former Dutch possession of Suriname on the South American mainland. In 1994, the Netherlands’ government agreed that Aruba could remain an autonomous area under Dutch sovereignty, its official status becoming that of a “constituent country within the Kingdom of the Netherlands.”

Although the animosity between Aruba and Curaçao was the biggest obstacle to Dutch Antillian unity, the other islands also had their own disagreements. Dissention about the political future of the islands grew intense. Some islanders wanted more separation from the Netherlands, others more integration. In referendums held between 2000 and 2005, only Saint Eustatius voted to remain in the Netherlands Antilles. Curaçao and Sint Maarten opted to follow Aruba, becoming fully autonomous “constituent countries” within the Kingdom. The voters on Bonaire and Saba, meanwhile, chose closer ties with the Dutch homeland. In the end, they, along with Saint Eustatius, were transformed into “special municipalities” of the Netherlands.

As “special municipalities,” Bonaire, Saba, and Saint Eustatius have seemingly become integral parts of the Netherlands, gaining voting rights in both Dutch and European elections. Yet their status remains exceptional. They will not receive the same levels of social security as the Netherlands proper, and they may not have to adopt all Dutch laws—notably that allowing same-sex marriage. In the most striking symbolic departure from European practice, when they dropped the Antillean guilder in January 2011, they adopted not the euro but the US dollar.

The official use of American currency in the three Dutch municipalities has generated some controversy, both locally and in the Netherlands. The heavy dependence on tourism played a role in the decision, as did the strength of the euro. The underlying economic issues, as well as the local cultural flavor, are nicely captured by the comments posted on a St. Maarten website by a dollar defender

Obviously u all aint livin on Sint Maarten to see what the euro is doin the french side of the island. Mussa 40% of businesses on da french side close down because of da value of da euro. Tay even got da citizen of the french side comin over on da dutch side to shop.

Although geopolitically defunct, the Netherlands Caribbean evidently still functions as a unit in sports. A recent headline reads, “Peru confident of beating Netherlands Antilles in Davis Cup.” The Netherlands Antilles’ Olympic Committee (NAOC) acknowledges no organizational change in its discussions of the activities of would-be Olympians from the islands. The geography section of the NAOC website, unfortunately, has not been updated for some time. It simply states that, “The Netherlands Antilles are now in the middle of restructuring the country. This means that from 2007 each island will have an individual relation with the Netherlands.”