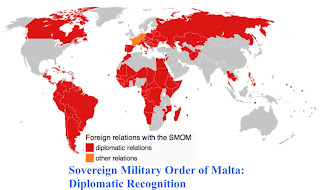 The global political system is founded upon the idea of sovereignty, defined by the Wikipedia as “the quality of having supreme, independent authority over a territory.” The independent countries that make up the geopolitical order are all purportedly sovereign entities, exercising complete power over their territorial domains. Such domains need not be large. Luxembourg is sometimes regarded as an almost comically small country (999 square miles), but it is a giant compared with Lichtenstein (62 square miles), which is a giant compared to Monaco (0.76 square miles), which is a giant compared to the Vatican City (0.17 square miles) – a walled-off collection of buildings in Rome. But at least the Vatican has a domain. The Sovereign Military Order of Malta has no territory at all, unless one counts the two buildings in Rome in which it enjoys extraterritorial legal privileges. Yet the Knights of Malta, as the organization’s official name denotes, is widely regarded as a sovereign entity, recognized as such by the 104 countries with which it maintains diplomatic ties (see map).

The Order’s international status, simply put, contradicts the standard definition of sovereignty. If the Knights of Malta have sovereignty, sovereignty does not denote the exercise of ultimate power over a place, but rather merely the acceptance into the club of ultimate powers, most of which are territorially based. In that case, I see no reason why an individual could not be regarded as a sovereign entity, as in Neal Stephenson’s novel Snow Crash (one of whose characters backed up his personal sovereignty with nuclear weapons).

Like the sovereign states of Monaco, Lichtenstein, Andorra, and San Marino, the Military Order of Malta is best regarded as a feudal remnant that somehow managed to escape Europe’s geopolitical modernization. Originating from the crusading order of the Knights Hospitaller of Jerusalem, it held the territorial domain of Malta from 1530 to 1798. Expelled from the island by Napoleon, it reestablished itself as a military-medical organization in Rome while holding on to its sovereign status. It has also retained a good measure of its feudal structure; until the 1990s, its officers had to be of noble birth. According to some sources, it has transformed itself over the past few decades from an exclusive, semi-monastic organization obsessed with genealogy to an effective, if idiosyncratic, humanitarian agency.

The Military Order of Malta may not control any territory, but it does have many of the trappings of sovereignty. Besides exchanging embassies with actual countries, it issues its own passports, postage stamps, and currency, although the latter two are largely collectors’ items. It also has its own military corps, which, like the order as a whole, is now largely devoted to international medical service.

The Knights of Malta are occasionally mentioned in the press for their humanitarian endeavors, most recently in Haiti. They have also been working in Lampedusa, a small Italian island between Sicily and Tunisia that serves as a detention center for asylum-seekers and other would-be immigrants to Italy.