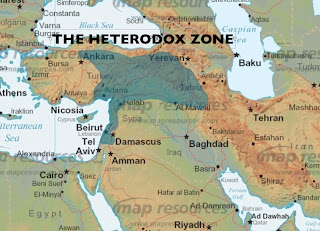 Yesterday’s post included a map of religious communities in northern Iraq, based on a larger map by Mehrdad Izady, generated as part of Columbia University’s Gulf 2000 project (http://gulf2000.columbia.edu/). As Izady’s maps show, northern Iraq is part of a larger region of striking religious diversity, highlighted on the map above. This area has no established name, and appears (to my knowledge) on no other maps, yet its delineation is essential for making sense of Middle Eastern politics, cultural dynamics, and history. In an attempt to bring this area to broader attention, I dub it “the Heterodox Zone,” a term that I picked up years ago in a casual conversation with the Turkish scholar Hakan Altinay.

The most distinctive faiths of the Heterodox Zone are three, grouped together by Mehrdad Izady under the rubric of Yazdanism or “the cults of angels.” These include the Yazidi religion, the faith of the Shabaks (who number some 60,000 in northern Iraq), and the religion of Yarsan (or Ahl-e Haqq), which counts up to one million adherents in Iranian Kurdistan. Izady considers all three to be survivals of the pre-Islamic Kurdish religion.

Less distinctive but far more prevalent is Alevism, a faith concentrated in eastern Turkey. Adherents of Alevism may number as many as 20 million. Although their religion is conventionally considered an offshoot of Shiite Islam, Alevis do not worship in mosques. They interpret the Quran on a strictly allegorical basis, and have no problem with alcohol. Alevism is also associated with the Kurds, but it is followed more extensively by the almost invisible Zaza people (speakers of the Zazaki language), who live to the north of the Kurdish language zone in eastern Turkey.

Distinctive religious communities extend through the highlands of the eastern Mediterranean. As many as three million people are ‘Alawis (or Alawites), a minority group that has the distinction of essentially running Syria. Another Shiite offshoot, the Alawite faith traditionally includes such non-Muslims beliefs as the transmigration of souls. (Some reports, however, claim that Alawite ideas and practices are gradually approaching those of orthodox Islam.) In the Druze religion, which has somewhere between 750,000 and two million followers, ideas and practices have diverged so far from the Islamic faith that the Druze are almost never considered Muslims. What exactly those beliefs are is difficult say, however, as the Druze keep their core beliefs secret not only from outsiders, but even from their own rank-and-file; only a select group is allowed access to the faith’s esoteric teachings.

The Heterodox Zone is associated with mountains and rugged terrain. That is to be expected; rough topography has often provided niches for minor languages as well as religions – social phenomena whose survival historically required a degree of shelter from the authority of states and their dominant societies. In the modern world, such zones of refuge are coming under pressure from larger and more intrusive politico-cultural formations. That is certainly true of the Heterodox Zone. In Iraq, Sunni extremists are now targeting the minority faiths, attacking their followers and forcing them to flee. Will autonomous Kurdistan offer adequate refuge? That remains to be seen.