The Geography of Extremism in Pakistan 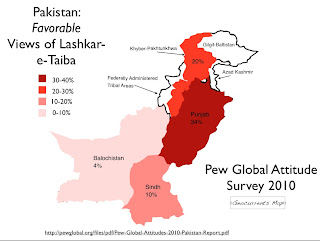 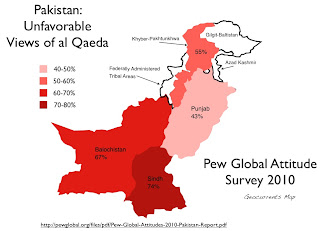 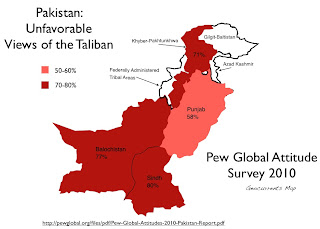 On July 29, 2010, the Pew Research Center released a heralded study of social and political attitudes in Pakistan. Its principal finding was announced in its title, “Concern About Extremist Threat Slips in Pakistan.” In 2009, 69 percent of Pakistanis reported being worried about extremists taking control of their country; a year later the number had slipped to 51 percent. Despite their lessened fear of militant Islamists, Pakistanis remain frustrated and pessimistic. 84 percent express dissatisfaction with the state of their country, and 78 percent think that its economy is in bad shape. Only 20 percent rate president Zardari favorably. Fewer still – 17 percent – have anything good to say about the United States: 59% regard the U.S. as an enemy country.

Most foreign commentators were both cheered and dismayed by the findings. Many were pleased to see that a majority of Pakistanis have little use for the Taliban or al Qaeda, and that 80% of Pakistani Muslims claim that suicide bombing can never be justified to defend Islam, “the highest percentage among the Muslim publics surveyed.” But reporters were also alarmed by the extraordinarily harsh social attitudes uncovered by the survey. 85 percent of Pakistanis evidently support the segregation of men and women in the workplace, 82 percent believe that adulterers should be stoned to death, and 78 percent call for the death penalty for those who leave Islam.

Almost all of the recent Pew data on Pakistan is nationally generalized and thus cannot be mapped. The report does, however, list levels of support for three extremist organizations in the provinces of Punjab, Sindh, Balochistan, and Khyber-Pakhtunkhwa. I have mapped this data and posted it above. [Note: the first map show favorable views of Lashkar-e-Taiba, while the second and third show unfavorable views of al Qaeda and the Taliban.]

The patterns revealed by the maps are consistent and unexpected. The Punjab, Pakistan’s core, is clearly revealed as its most radical province. News reports, however, more often associate extremism with Pakistan’s western periphery, especially the Pashtun northwest, which is the site of most violence. But the Pew data shows that most residents of Pashtun-majority Khyber-Pakhtunkhwa reject Jihad-oriented movements. (Attitudes in the Pashtun tribal districts along the Afghan border were not surveyed, and are probably much more extreme.) Khyber-Pakhtunkhwa’s rejection of radical Islamism is probably related to its constant exposure to bloodshed, which usually turns most people away from violent ideologies.

More difficult to explains is the relatively high levels of support for extremism in Punjab. Punjab dominates Pakistan, forming the demographic, cultural, and economic core of the country, with considerably higher levels of development than Sindh, Balochistan, or Khyber-Pakhtunkhwa. Punjab’s 34 percent support for Lashkar-e-Taiba, a group that supposedly aims “to destroy the Indian republic and to annihilate Hinduism and Judaism,” does not bode well for the future of Pakistan.