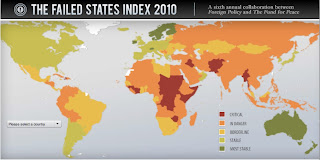 The use of the term “failed state” has surged over the past fifteen years, as can be seen in the Google N-Gram posted above showing the frequency of the term’s occurrence in scanned books. A January 8, 2011 Google news search for “failed state” yielded—in the first twelve articles alone—stories on Sudan, Mexico, Egypt, Nepal, Kenya, Pakistan, Belgium, and Nigeria. The first pick, from the Huffington Post, claims that South Sudan is a “failed sate in waiting,” a charge later echoed in The Telegraph. Remarkable: here we find a state that does not yet exist, yet has already been declared dead. Other assertions of state failure seem equally rash; while Mexico and Egypt have problems aplenty, neither is close to systematic state breakdown. But a determined enough critic can apparently find evidence of state failure almost anywhere. A recent AlterNet posting, leaning on the work of Noam Chomsky, declares that the United States is a “semi-failed state,” and goes on to assert that Victorian Britain “meets many of the formal criteria of failed statehood.” If Victorian Britain, which dominated almost half the world, was a “failed state,” we might as well toss the term out.

Needless to say, more precise definitions have been proposed. The Fund for Peace, which along with Foreign Policy magazine has established the influential Failed States Index, has put forward the following criteria of state failure:

The checklist seems reasonable at first glance, but is difficult to use in practice. The last criterion is seemingly impossible to reach; the state of Somalia controls virtually nothing, yet remains a full-fledged member of the international community.* Other problems further undercut the proposed criteria. An “inability to provide reasonable public services” reflects a broader failure of government rather than that of the state per se, as regional authorities can in some instances deliver. “Erosion of legitimate authority” is a trickier concept, as one first has to assess where legitimacy lies. At the popular level, according to the Fund for Peace, delegitimation occurs through the loss of “confidence in state institutions and processes, [as demonstrated by] widely boycotted or contested elections, mass public demonstrations, sustained civil disobedience…” Yet North Korea, which has experienced none of these things, is deemed an almost completely “deligitimated” state. For all we know, most North Koreans view their government as legitimate; propaganda, after all, often proves effective. North Korea apparently earns its non-legitimate status in the index on the basis of its “massive and endemic corruption” and “the lack of transparency, accountability and political representation,” features that do indeed pertain. But both endemic corruption and lack of representation mark some of the world’s most solid states, including China. The Fund for Peace also views the “violation of human rights” as an indicator of state failure, but massive repression, unfortunately, can solidify the standing of a precarious state, as was recently witnessed in Iran.

The Failed State Index uses twelve indicators, which in turn are divided into a variety of sub-indicators. Some of the metrics are classified as social (demographic pressures, human flight), others as economic (GDP decline, uneven development), and still others political (violation of human rights, intervention by other states, and so forth). Taken together, these various markers can indeed highlight a general level of overall disfunctionality in any given country. But failure in this sense is not the same as state failure. State-run structures of control can remain strong in the face of precipitous economic decline or of human rights outrages. By viewing the “state” as a kind of political-social-economic totality, the Failed State Index loses sight of the state itself, which strictly speaking refers to the institutions of central governmental power, especially in their coercive function. It thus classifies moribund states, such as Bosnia and Herzegovina and Belgium, as much less threatened with collapse than cohesive and repressive states prevailing over dismal economies, such as North Korea and Eritrea. While North Korea might justifiably be called a failed country, there is little evidence that its state apparatus it tottering. Regarding it as such seems like a case of perversely wishful thinking.

If the Failed State Index is a promising but problematic analytical tool, the map that accompanies it on the Foreign Policy website is something else altogether. At first glance, it appears the cartographers have mapped sovereign states from red to green, while using white as an unmarked category to include both dependent territories, such as Greenland and Puerto Rico, and key disputed lands, such Western Sahara and the Hala’ib Triangle (claimed by Sudan, administered by Egypt). Closer inspection, however, reveals a stunning lack of consistency. The regions depicted in white turn out to have nothing in common. Some are dependencies and a few are disputed territories, but others range from autonomous areas, to insular portions of sovereign states, to fully independent countries. Meanwhile, the world’s hottest territorial dispute, Kashmir, is essentially invisible: the area controlled by India is mapped as part of India, the area controlled by Pakistan is mapped as part of Pakistan, and the area controlled by China (Aksai Chin) is mapped as if it were a lake (or perhaps desiccated lake, given that it is portrayed exactly like the Aral Sea!).

A few of the oddities on the map deserve special mention. The cartographer’s most glaring gaffe is the excision of the island of Newfoundland from Canada. France too is shorn of most of its islands; the map implicitly refutes French sovereignty over all of its overseas departments (Guiana, Martinique, Guadeloupe, and Réunion), even though they are as much parts of France as Hawaii and Alaska are parts of the United States. In the Caribbean, several independent island countries (Saint Vincent and the Grenadines, St. Lucia, Dominica, and more) are denied sovereignty, mapped instead as white splotches. Further south, Chile has been divested of its half of Tierra del Fuego. Some autonomous island groups, such as Portugal’s Azores and Finland’s Åland Archipelago, are mapped in white, but not Denmark’s autonomous Faroe Islands. Taiwan, a de facto sovereign state not recognized by most other independent countries, is shown in white, but Kosovo, which fits the same category, is colored. A too-large West Bank is mapped in white, but in the accompanying tables it is aggregated with Israel. Elsewhere the mapmaker takes islands belonging to one country and assigns them to another. The coloration scheme shows Socotra as part of Somalia rather than Yemen, Rhodes as part of Turkey rather than Greece, and the Florida Keys as part of the Bahamas rather than the United States. Similar errors abound. Have the editors of Foreign Policy and the creators of the Failed State Index never checked their own map?

*On May 19, 2010, Somalia asserted its own unchallenged diplomatic standing by recognizing Kosovo, and thereby giving that partially recognized state a tad more international legitimacy.