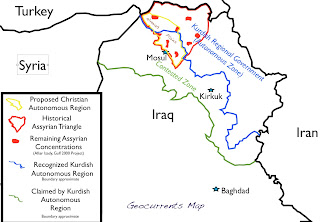 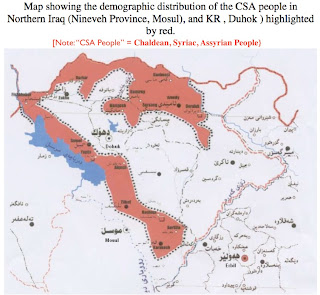 The relationship between the Christians of northern Iraq and the Kurdish Regional Government is complicated. Kurdish authorities portray their land as a safe haven for all minority groups – and for good reason. But local Sunni Arab politicians, and some Christians as well, have accused Kurdish militias of driving Assyrians out of their homes in the contested zone to the southwest of the Kurdish autonomous region. Christian groups are now asking for their own zone of autonomy, although their likelihood of gaining one seems slim indeed.

The Kurds and the Assyrians have a history of troubled relations. The Ottoman-sponsored massacres of Assyrians during World War I were largely carried out by Kurdish irregular forces. At the time, Kurds and Assyrians competed for lands and resources, and the empty British promises that the Assyrians would be politically rewarded if they fought the Ottoman Empire did not sit well with local Kurds. The rise to power of the Iraqi Baath party in the 1960s transformed the political situation of both Kurds and Christians. Under a hard-core Arab nationalist state, the Kurds, who had long cultivated their own national identity, found themselves under assault. But the Assyrians, whose own national aspirations had been crushed by the massacres of the early 20th century, generally acquiesced to the Baath regime and lived in relative peace.

The situation changed dramatically with decline and fall of Saddam Hussein. The Kurds were able establish “the other Iraq”: a generally secure area, marked by toleration of ethnic and religious differences. The Christian community within the Kurdish-controlled area has done relatively well, but Christians elsewhere in the country have come under attack. The situation has been especially perilous in the contested zone.

In March 2010, the elected head of Nineveh Governorate in northern Iraq, Atheel al-Nujaifi, charged Kurdish militias with forcing non-Muslims out of the contested zone so that it could be more easily annexed by the Kurdistan Regional Government. In a letter sent to the European Union and the United Nations, he demanded an international inquiry into attacks in and around the city of Mosul. Leader of a largely Sunni Arab voting block, Al-Nujaifi claimed that, “Those opposing the Kurdish agenda are persecuted, threatened, arrested and even liquidated.”

Kurdish leaders have denied the charges, claiming that al-Qaeda-aligned militias are to blame. They note al-Nujaifi’s hostility toward Kurdish interests; according to the Christian Science Monitor, even U.S. authorities described his electoral campaign as “blatantly anti-Kurdish.” Although al-Nujaifi denies accusations of anti-Kurdish bigotry, he steadfastly opposes expansion of the Kurdish autonomous region, and crows that the Kurds are bound to fail in their quest for additional territory.

In 2009, the Kurdish Regional Government’s representative in the United Kingdom released a report on the conditions of Christians in the autonomous territory, written in response to earlier allegations of anti-Christian actions by Kurdish armed forces. The report, quoting Nechirvan Barzani,* emphasized that the Kurdish cause would be undermined by the ethnic cleansing of minority groups:

The Kurds would have the most to lose politically from these incidents, since the Arab proportion of the population would rise. Those wishing to lay the blame for these incidents on our doorstep are enemies of democracy, enemies of a federal Iraq. They wish to make blatantly false claims in order to undermine the basic rights of freedom, democracy and fair representation.

The report makes interesting reading, especially for the manner in which it frames ethnic relations. Iraqi Kurdistan, the author emphasizes, is founded not on Kurdish national identity, but rather on multinational inclusion. Again quoting Barzani:

We talk of nationalities, not minorities, and we protect them all, and their rights. In our region, Turkomen, Assyrians, and Arabs have schooling and administration in their own languages. We are proud of our record of religious tolerance – toward all varieties of Muslim, Chaldean, and Assyrian Christians, and our few remaining Jews, and we will always defend our Yezidis from prejudice and discrimination, whether by Kurdish Muslims or others.

Christian organizations in Iraq have put forward their own plans for a sphere of self-government, perhaps in conjunction with other religious minorities. The focus of such efforts is the Nineveh Plains, to the northeast of Mosul. Some Christians have insisted that any such autonomous area must be independent of the Kurdish Regional Government, and have accused Kurdish authorities of “intimidating Assyrian political and religious leaders to sign a letter stating they wanted the Nineveh Plains to be annexed to the Kurdish Regional Government.”

Another proposed zone of Christian autonomy would encompass not just the Nineveh Plains, but also a large swath of mostly Kurdish-inhabited territory along the border with Turkey (see the second map posted above). The authors of this plan also appeal to the central Iraqi government, seeking it allay its concerns:

[M]any Arab political parties, MPs and government officials … harbour fears that the [Christian] people were seeking independence, an allegation that the council has categorically rejected and refuted stressing that this peaceful, defenseless and law-abiding people can never cause damage to the national unity of Iraq or seek to isolate itself from the other components of the Iraqi people, especially when everybody knows that it does not have the potential and capability to dismantle the unity of Iraq and divide it.

The internal geopolitics of Iraq is nothing if not complex, frustrating all attempts at cartographic portrayal. As long as we insist on viewing the country as a nation-state encompassing just three groups of people – the Sunni Arabs, the Shiite Arabs, and the Kurds – we will never begin to understand it. Local particularities must be examined, and in painstaking detail.

The current series on northern Iraq and environs will conclude with next Monday’s post on the Yezidis, members of a truly fascinating religious sect.

* Nechirvan Barzani was prime minister of the autonomous Kurdistan Regional from March 2006 to August 2009.