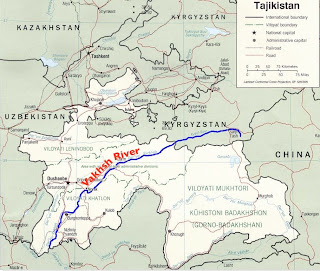 In August 2008, the New York Times described Tajikistan and Uzbekistan as being locked in a “cold war.” Recently, the conflict has warmed up. In early 2010, Uzbekistan imposed a partial blockade on Tajikistan, a much poorer country poorly tied into global transportation networks. Uzbek authorities have been holding freight cars at the border, stifling Tajikistan’s economy. Uzbekistan’s government counters that technical and logistical difficulties have merely slowed traffic over the border. But Tajik authorities are so concerned that they are considering taking the issue to international courts. They are also talking about alternatives for their cargo. Tajik Transportation Minister Olim Boboev has specifically advocated “a 250-kilometer rail link connecting Tajikistan with Turkmenistan via northern Afghanistan,” not an easy project. As anger against Uzbekistan mounts in Tajikistan, anger at Tajikistan rises in Uzbekistan. In March 2010, around 1,000 university students and professors marched in the Uzbek city of Termez to protestTajikistan’s plans to expand a highly polluting aluminum smelter near the Uzbek border. 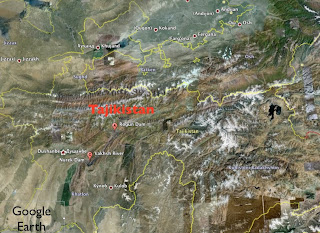 A root cause of the Tajikistan-Uzbekistan feud is water. Former Soviet Central Asia is a dry region that depends on the snow-fed rivers flowing out of the Pamir and Tien Shan mountains. Mountainous Tajikistan and Kyrgyzstan contain its major headwaters, thus potentially controlling the water supply. Downstream Uzbekistan is water-short yet highly dependent on irrigated agriculture. It is hardly surprising that its government fears potential upstream water diversions. Energy-poor Tajikistan wants to build dams primarily to generate hydroelectricity. In 2009, Uzbekistan partially cut off natural gas supplies to debt-strapped Tajikistan, almost shutting down its aluminum smelters — one of the Tajikistan’s few competitive industries. Dam-building would not only protect the industry from such threats, but would allow it to expand.

The dam in question is the Rogun on the Vakhsh River, an important tributary of the Amu Darya. If it is ever completed, Rogun will be one of the world’s highest dams. Work began in 1976, but the unfinished project sank with the Soviet Union in 1991. In 2007, Russia partnered with Tajikistan to complete the dam, but the two parties soon fell out. The Tajik government announced in early 2010 that it would try to raise by itself the $1.4 billion needed to finish the dam. Uzbekistan demanded an independent study to prove that its own water supplies would not be adversely affected, and when Tajikistan refused, cross-border traffic came to a crawl. If it is to complete the Rogun Dam, Tajikistan will need to import vast quantities of construction supplies and heavy equipment.

Uzbekistan’s water concerns are understandable. Water shortages not only threaten its agriculture, they have also almost destroyed the Aral Sea. But Uzbekistan’s sclerotic economy wastes vast quantities of water, and its government shows little interest in conservation. Uzbekistan’s portion of the Aral Sea continues to disappear; its entire eastern basin is expected to dry out this summer. Kazakhstan’s northern Aral Sea, on the other hand, is making a significant recovery, as we shall see in tomorrow’s post.