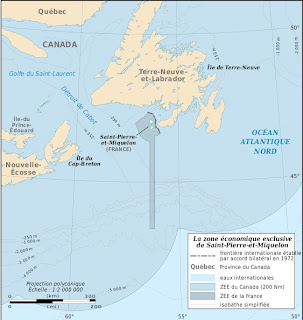 The world’s most unlikely center of Basque culture is probably Saint Pierre and Miquelon, a windswept group of islands covering 93 square miles (242 square kilometers) located twelve miles (19 kilometers) off the shore of Newfoundland. The Basque presence on the islands is of long standing, dating back to the first European exploitation of the cod fisheries of the Grand Banks in the 1400s; today, an estimated thirty percent of the archipelago’s 7,000 people are of Basque origin. Every August, Saint Pierre and Miquelon holds a Basque festival. This year’s event was evidently a success, featuring music, dancing, shows of strength, and the Basque national game of eusko pilota. Headlining the show was the musical group Gau-Aïnarak, from Jatxou in the Northern Basque Country of southwestern France. 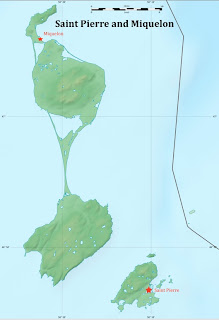 It is fitting that the musical entertainment at this year’s fete came from the French Basque region, as Saint Pierre and Miquelon is a possession of France. Technically a Territorial Collectivity, the archipelago is a remnant of France’s one-time North American empire. When it lost its mainland holdings after the Seven-Year War in 1763, France was allowed to regain possession of the islands, which it had ceded to Britain in 1713. The return of Saint Pierre and Miquelon was not an insignificant consolation, since it served as a base for the Grand Banks fishery, then the richest in the world. The archipelago passed back and forth between Britain and France during the Napoleonic period, but since 1815 it has remained securely in French hands. World War II saw some drama. The local governor remained loyal to the fascist Vichy regime, leading Canada to threaten action. Instead, Charles De Gaulle took the islands by force. As De Gaulle had not informed the American government of his impending micro-invasion, Franklin Roosevelt was not pleased, contributing to his distrust of the Free French leader.

The fisheries of the Grand Banks once bought prosperity to Saint Pierre and Miquelon. In the 1920s, alcohol smuggling to the United States also proved lucrative. With the end of prohibition and, more recently, the depletion of cod stocks, the economy of Saint Pierre and Miquelon has languished. Per capita GDP in 2001 was a mere $7,000, necessitating heavy French subsidies. France hopes that tourism will boost the economy, but prospects seem dim. Offshore oil drilling is another distant possibility. As shown on the accompanying map, the territory has an oddly shaped exclusive economic zone of maritime territory. France had claimed a much larger slice of sea-space, but international arbitration in 1992 awarded most of the contested area to Canada. 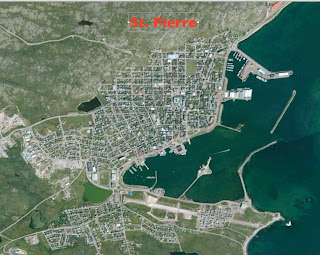 The physical geography of Saint Pierre and Miquelon is also noteworthy. As the map above hints, the larger island of Miquelon was originally three separate islets. In the 1700s, a sand isthmus emerged naturally between the two larger chunks of land, which has subsequently been reinforced through engineering projects. The waters around the islands are perilous, noted for hundreds of shipwrecks. Fishermen refer to the channel separating St. Pierre from Miquelon as “the Mouth of Hell.”