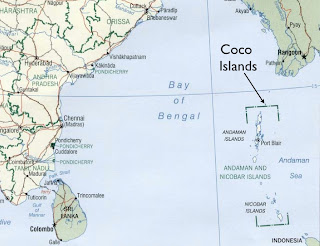 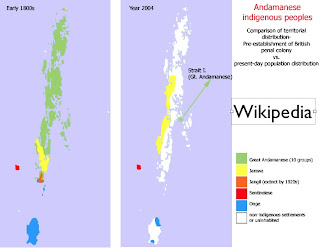 In February 2010, a number of major media outlets reported the death of Boa Sr, the last speaker of Bo in India’s Andaman Islands. Sadly, there is nothing unusual about the extinction of Bo; a language disappears somewhere in the world roughly once a month. Some 500 languages are spoken by fewer than ten people, and half of the world’s languages are expected to disappear by 2100.

Yet the indigenous peoples and languages of the Andaman Islands deserve special attention. Until pried open by the British in the late 1700s and early 1800s, the Andaman Islands were a world apart, occupied by a group of linguistically diverse societies successfully resisting contact with everyone else. The Andamanese seemed to have retained cultural and genetic characteristics that marked the first migration of modern human beings out of Africa and into coastal Asia some 50,000 years ago. Like the equally isolated Tasmanian Aborigines, they allegedly had no knowledge of making fire, carefully preserving burning embers for future use.

When the British arrived, so did epidemic diseases, ravaging the indigenous population. Some scholars think that British administrators set out to exterminate certain Andamanese groups, which were noted for their extreme hostility toward outsiders—and for their skill with the bow. By 1900, only some 600 people still spoke languages in the Great Andamanese group, the largest linguistic family in the archipelago. With the extinction of Aka-Kora in late 2009 and of Bo in 2010, only one of the ten original Great Andamanese languages remains. Just fifty people speak it, a number too small to ensure survival.

The Ongan language family of the southern Andaman Islands has done better, with roughly 200 people speaking one of its surviving languages and 100 speaking the other. The 250 or so inhabitants of North Sentinel Island may also speak a language that belongs in this family, but that is mere conjecture, as Sentinelese remains an unexamined tongue. To this day, outsiders who venture onto the island are attacked and driven away. North Sentinel may be internationally regarded as Indian territory, but that means nothing to the island’s inhabitants, who remain effectively independent not just of India but of the modern world. In 2006, when helicopters arrived to retrieve the bodies of two fishermen who had trespassed into their waters, Sentinelese archers harassed them with arrows.

The rest of the Andaman archipelago, by contrast, has been integrated with the modern world for some time. The first connection seems to have come in the seventeenth century, when the Marathas of India established a temporary naval base in the area. By the mid 1800s, the British had conquered most of the archipelago. They soon built a notorious penal colony, which was heavily used after the Indian rebellion of 1857. Subsequent migration streams brought people from different parts of South Asia, resulting in a multilingual and relatively cosmopolitan population of some 300,000 today.

The hottest recent developments in the Andaman Islands are related to regional geopolitics. In February 2010, India announced a major expansion of military installations in both the Andaman and the neighboring Nicobar islands. According to a February 7, 2010 article from the Hindustan Times, local airstrips “were being extended from 3,200 feet to 12,000 feet to support all types of aircraft, including fighters. … [while] the army was planning to beef up its brigade-level deployment (around 3,000 soldiers) with three more battalions and support units.” The local command has recently obtained such naval equipment as a large Landing Ship Tank (LST), which can hold more than 200  armed troops, six trucks, ten main battle tanks, and twelve infantry combat vehicles, according to the Indian news outlet DNA.

India’s military build-up in the Andaman Islands comes in reaction to Chinese naval forays into the area. China has apparently constructed some sort of military intelligence facility in the Coco Islands, a Burmese outlier just to the north of the Andaman Islands (see map). Although both China and Burma (Myanmar) deny the allegation, Indian officials are convinced that it is designed to monitor their naval activities as well as the Indian Space Research Center, located on the Andhra Pradesh coast.