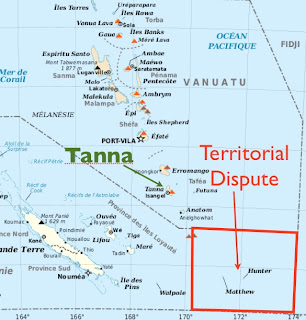 Melanesia, as we have seen, is culturally varied. Global linguistic diversity probably reaches its extreme in the highlands of New Guinea, but Vanuatu contends for the title. Its 243,000 people speak 113 indigenous languages. According to the Wikipedia, its “density of languages, per capita, is the highest of any nation in the world, with an average of only 2,000 speakers per language.” But as all Vanuatu’s languages are Austronesian, its linguistic diversity at the family level does not match that of Solomon Islands, much less New Guinea.

Vanuatu’s unifying language is Bismala, a creole tongue often called “Pidgin English.” Although more than 95 percent of its vocabulary is of English derivation, Bismala’s grammatical structures are heavily Austronesian. But Bismala is only one of three official languages of the country, the others being English and French. Their use reflects Vanuatu’s unique colonial heritage as an Anglo-French “condominium.” After competing for control of the archipelago in the late 1800s, Britain and France decided in 1906 to rule it jointly. Unfortunately, rivalry between Anglophone and Francophone Vanuatuan elites has generated much tension. 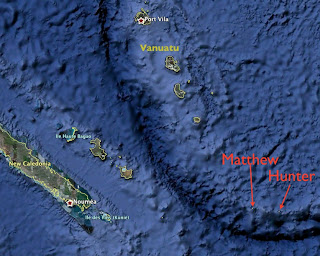 Vanuatu’s current relations with France are strained, owing to the Matthew and Hunter Islands dispute. These small, uninhabited volcanic islets are conventionally mapped as part of New Caledonia, hence of France. France maintains an automated weather station in the area, and its navy patrols the local waters. Vanuatu, however, claims sovereignty. In June 2010, a high-level delegation from Vanuatu visited New Caledonia to take on the issue, apparently with little success. Vanuatu’s political opposition was not pleased, claiming that “the government is on the verge of backing down to France in the dispute over Matthew and Hunter islands.” One opposition leader appealed to physical geography to uphold Vanuatuan sovereignty: “Geographically, it [Matthew and Hunter] belongs to Vanuatu, that’s all our interest.” As the Google Earth image post above shows, the two islands are linked by submarine physical features to Vanuatu rather than New Caledonia. 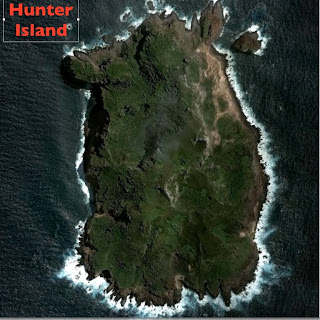 Vanuatu is a poor and remote country with few economic resources. As part of its development policy, the government has been encouraging off-shore banking and tourism. The latter strategy has been relatively successful, building on Vanuatu’s remarkable natural and cultural environments. Tourist arrivals reached almost 200,000 in 2008, propelled in part by the 2004 television show,Survivor: Vanuatu — Islands of Fire.

Some Vanuatu tourism sites tout the island of Tanna, noted for its cultural preservation. A number of Tanna communities have partially opted out of the contemporary world, restricting modern inventions and eschewing public schools. In these so-called kastom (“custom”) villages, women wear grass skirts and men don the time-honored Melanesia penis sheaths. Another tourist attraction of Tanna is kava, the traditional psychoactive beverage of the region.

Despite its reputation for traditional customs, Tanna has intensively interacted with contemporary global culture, interpreting the outside world in its own terms. The most intriguing of its cultural accommodations may be the John Frum Cargo Cult, which essentially worships an American solider from the second world war, and the Prince Philip Movement, which venerates the husband of Queen Elizabeth the Second, the United Kingdom’s prince consort.