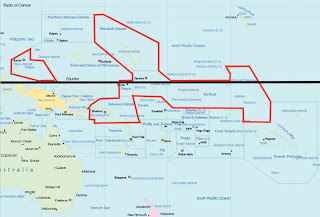 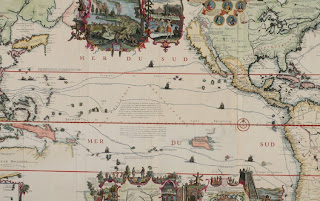 On March 15, 2010, a number of newspapers announced that Taiwanese President Ma Ying-Jeou would visit his country’s allies in the South Pacific: Nauru, Kiribati, Marshall Islands, Palau, Tuvalu, and Solomon Islands. Such headlines were doubly wrong. The region specified is not exactly in the South Pacific, and the countries mentioned are not exactly allies of Taiwan.

To be sure, much of the territory of the six countries on Ma’s itinerary is in the South Pacific, but roughly 40 percent actually lies in the North Pacific (see map). This minor error is extremely common; Palau and the Marshall Island (along with the Federated States of Micronesia, Guam, and the Northern Marianas) are almost always conceptualized as being in the South Pacific, despite the fact that they are entirely north of the Equator that divides the ocean into its northern and southern halves. This unmoored usage of the term “south” stems from a time when the entire Pacific was called the South Sea (or Mer du Sud; see map above), referencing the fact that mariners usually entered the ocean from the south, sailing around the tip of South America.

Additionally, regardless of where they are situated, it is not quite accurate to describe these countries as allies of Taiwan. An ally, according to the common definition, is a “state formally cooperating with another for military or other purposes.” It is difficult to imagine Nauru, a mined-out semi-wasteland of eight square miles and fourteen thousand people, coming to the aid of Taiwan for military or any other purposes. The relationship between these countries and Taiwan is actually one of clientage rather than alliance. In essence, Nauru, Kiribati, Marshall Islands, Tuvalu, Palau, and Solomon Islands sell their diplomatic recognition to Taiwan in exchange for aid. Taiwan thereby gains a small measure of international legitimacy, while these small Pacific countries gain much needed financial resources. A couple of them have switched their recognition between Taiwan and the People’s Republic of China on several occasions, rewarding the more generous patron with their acknowledgement. Nor are they alone in the practice; Taiwan maintains the diplomatic recognition of 23 countries in total.

Nauru was once a rich little country with vast phosphate deposits. But the mines have been played out and the trust fund looted, putting Nauru in a desperate situation. Its only real resource now is diplomatic, based on its status as a recognized sovereign state. In 2009, it received $50 million from Russia in exchange for recognizing the independence of Abkhazia and South Ossetia. Such recognition may seem to mean little in practice, but it evidently has value.