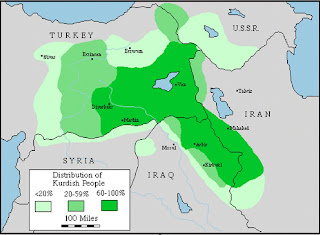 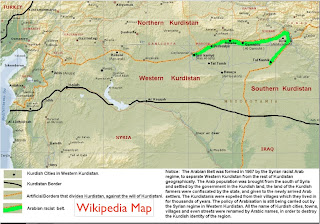 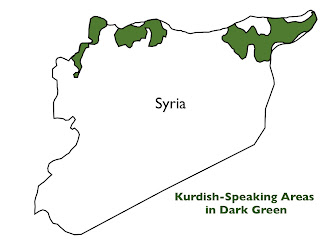 The official Syrian credo of Arab nationalism may allow safe haven for Christians, provided that they do not defy the state or attempt to convert Muslims. But it gives no such concessions to the Kurds, whose very identity challenges the Baath ideology of the Syrian state, which is based on the political priority of Arabs. Baath leaders in both Syria and Iraq have tended to view the Kurds as alien elements threatening the national essence. As such, the situation of the Kurdish population of Syria remains grim, as it had been in Iraq before the removal of Saddam Hussein and his Baath-party establishment.

Maps reflecting the official Syrian position minimize the Kurdish presence in Syria (see the first map posted above), but in actuality the Kurdish-speaking population of the country is substantial. Most sources put it around two million, or roughly ten percent of the total population, but Kurdish sites peg it at more than 15 percent. Counting the Kurds of Syria is not easy. The Syrian government does not conduct transparent censuses, and it hardly acknowledges Kurdish existence in the first place. According to the Wikipedia article on Syrian Kurdistan, even the United States Department of State and the CIA refused to acknowledge the Kurds of Syria through the 1980s.

The difficulties faced by the Kurds in Syria go well beyond being overlooked by their government. Some 300,000 of them are denied citizenship, relegated to statelessness with no access to passports and, in many cases, governmental services. Evidently, a Syrian census of 1962 found a sizable majority of Kurds in the northeastern Al Hasakah Governorate; considering such a situation intolerable, the government began stripping away the national status of local residents, accusing them of being illegal immigrants from Iraq or Turkey. Fearing that a border-spanning Kurdish nationalist movement could threaten its territorial integrity, Syria also began clearing Kurds away from sensitive areas. It subsequently initiated a program of “Arabization,” importing Arabic-speakers to inhabit the boundary separating Syria from Iraq and Turkey. This resettled border zone is called the “Arabian Racist Belt” by some Kurdish sources (see the second map above).

Most sources concur that the lot of the Kurds of Syria is worse under the rule of Bashar al-Assad than it had been under that of his father, Hafez al-Assad. Their plight intensified after pro-Kurdish demonstrations angered the government in 2004. According to a recent report in Kurdish Aspect, Kurds subsequently began fleeing Syria for Europe and Iraqi Kurdistan, where many remain in refugee camps. A 2009 report from Human Rights Watch highlights the current state of repression:

Syrian security forces have repressed at least 14 Kurdish political and cultural public gatherings, overwhelmingly peaceful, and often resorted to violence to disperse the crowds. Not only have the security forces prevented political meetings in support of Kurds’ minority rights, but also gatherings to celebrate Nowruz (the Kurdish new year) and other cultural celebrations. In at least two instances, the security services fired on the crowds and caused deaths.

Mapping the Kurdish area of Syria is made difficult by such conditions. If some maps show very little Kurdish presence in the country, others depict all of northern Syria as “Western Kurdistan.” This maximal view, seen in the second map, is based on both past distribution and on a dream of eventual expansion. (Note that this map shows Kurdistan extending to the Mediterranean Sea, even though the coastal strip has never had a Kurdish majority.) The final map depicts contiguous areas in Syria with Kurdish-speaking majorities, as reflected in several language atlases.

The situation of the Kurds in Syria has significance beyond that of human rights. It also speaks to the basic world model that structures our diplomatic system, guides our educational efforts, and informs our global news reporting. According to that model, all independent countries are automatically nation-states, their governments legitimized through appeal to the nation, the political community composed of the citizens inhabiting the territory of the state. But in Syria, the “nation” that is identified with the state is far from universal within its own boundaries, as it expressly excludes the Kurds. If one regards Syria as an unproblematic nation-state, one might be accused of accepting Baath ideology and consigning the Kurds of Syria to a stateless position of political oblivion.