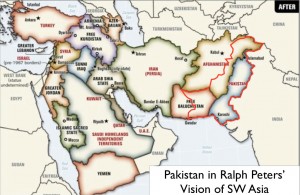 A recent (May 14) discussion thread in GeoCurrents takes on the one-dimensional left/right political spectrum. Jim Wilson perceptively notes that he “always like[s] watching political commentators trying to decide whether those who want to roll back the reforms of Deng Xiaoping are the right wing or the left wing of the Chinese Communist Party.” Another instance in which it can be difficult to distinguish left from right is the debate over the role of the United States in the Balochistan conflict. Several recent articles exemplify the difficulties involved.

The first case in point is a recent article by Tony Cartalucci, entitled “US Government is Behind the Baluchi Insurrection.” Cartalucci blames the United States, along with oil companies, international financial firms, and “corporate-financier funded NGOs,” for inciting violence in Baluchistan. The nefarious goals of such intervention, Cartalucci argues, are to partition Pakistan, to “hobble the development” of India, Iran, and China, to weaken Asia more generally, and thereby to secure the US-led “international system.” His conclusion is extreme:

For those wondering why America is attempting to escalate tensions in Pakistan over the “Bin Laden” hoax instead of using it as an excuse to leave the region, the Balkanization of Pakistan and the permanent disruption of Pakistan’s, Iran’s, and China’s development is your answer. It isn’t a matter of if, it is now only a matter of how big the insurrection can be grown.

On the face of it, Cartalucci’s article might seem to be on the far left of the political spectrum. The periodical in which it is published, Salem-News, carries article with such provocative titles as “Military Rape: (SOP) Standard Operating Proceedure.” On further examination, however, the situation is not so simple. Cartalucci, it turns out, traffics with the far right, working with Liberty News Radio, which features the infamous White-supremacist show, The Political Cesspool. Just below a recent Cartalucci piece on the LNR website is an article claiming that “Martin Bormann, the man who signed Hitler’s paycheck was a Soviet i.e. Illuminati agent.” Perhaps, in the end, Cartalucci is simply an extremist; as the French saying puts it, “les extremes se touchent” (“the extremes meet”).

A seemingly more conventional left-wing take on Balochistan is found in a recent Michael Hughes essay in the Huffington Post. Hughes comes down on the United States almost as hard as Cartalucci does, finding it complicit in the slaughter of 10,000 Pakistanis. His premises, however, are effectively the opposite of Cartalucci’s. In his perspective, the US has unconscionably sided with the vile Pakistani government against the “brave and noble” freedom fighters of Baluchistan. As Hughes puts it:

The Pakistani state has misused billions in U.S. military aid (belied by its harboring of the world’s most wanted terrorist) and has used U.S. military hardware—including F-16s, Cobra helicopters and CIA listening devices—to oppress the Baloch people on a daily basis, an oppression that features emotionally torturous tactics such as what the Baloch refer to by the literal euphemism “kill and dump” along with enforced disappearances at a clip that rivals Pinochet’s Chile…

Yet Michael Hughes presents his own admixture of left and right; he not only advocates the independence of Baluchistan, but calls openly for the “Balkanization” of Pakistan. He would like to see Sindh and Punjab become independent countries and the Pashtun areas of Pakistan appended to Afghanistan. Proposing such a division of a sovereign state is by no means common on the left. Most advocates of Pakistani partition are conservative, and most leftists would probably regard the idea as a “divide and rule” neo-imperial ploy.

Hughes begins his article with a nod toward seasoned journalist/scholar/ statesman Selig Harrison, who has been writing on Balochistan since the 1970s. Harrison is not easy to peg, either. Most of his positions, such as favoring normalization with North Korea, would be considered left-of-center. He does seek to enhance U.S. security, however, and one of his recent articles on Balochistan appears in a conservative journal, The National Interest. Yet even here his arguments begin on the left. In regard to Pakistan, he wants to end drone attacks and military subsidies while maintaining development support and the flow of IMF funds. Harrison would also like to increase market access in the US for Pakistani exporters. But in the end, Harrison too calls for the division of the country. His reasoning here hinges on US national security:

Most important, [the United States] should aid the 6 million Baluch insurgents fighting for independence from Pakistan in the face of growing ISI repression. Pakistan has given China a base at Gwadar in the heart of Baluch territory. So an independent Baluchistan would serve U.S. strategic interests in addition to the immediate goal of countering Islamist forces.

Such a position is difficult to square with Harrison’s other recommendations, which focus on calming the relationship between the Washington and Islamabad. From the Pakistani perspective, drone strikes are minor irritants compared to the possible secession of Baluchistan.

By advocating the break-up of Pakistan, Harrison and especially Hughes move into the territory of the right-wing strategist Ralph Peters, whose 2006 article “Blood Borders: How a Better Middle East Would Look” contemplates the wholesale rearrangement of the region’s geopolitical order. (I have reproduced Peters’ map here, adding the outline of Pakistan; see the previous GeoCurrents post for a longer discussion.) The publication of “Blood Borders” provoked outrage from Pakistan to Turkey, as many local commentators assumed that it represented a secret US plan for dismembering their countries to enhance American and Israeli power.

Regardless of Harrison and Hughes’ ideological proclivities and political bedfellows, their portrayal of the Baloch insurgency should be taken on its own terms. Both authors find the rebellion essentially secular, arguing that its success would help counter radical Islamism. Such a depiction may fit the Pakistani side of the border, but not the Iranian side. And even in Pakistan, some skepticism is warranted. Hughes views the Baloch people uncritically, claiming that they form “a society that believes in a traditional nonviolent version of Islam” and that “respect[s] the natural rights of each individual.” Such an appraisal may be a tad naïve. Baloch culture is usually described as deeply hierarchical, highly conservative, and suspicious of individual rights, especially where women are concerned. So-called honor killings are relatively common. In a particularly infamous 2008 case, five Baloch women—including three teenagers—were tortured and then buried alive for the “crime” of attempting to marry men of their own choosing. 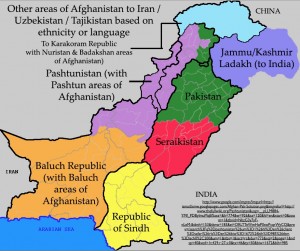 The desire to dissect Pakistan, by the way, is not limited to Baluchi insurgents and American political writers. The view is probably most widespread in India. The most extreme partition scheme is the one seen on this map, which also divides Afghanistan. I have not traced the map’s provenance, but I can only assume that it is Indian. Note that the author’s rump Pakistan would not even include south Punjab.