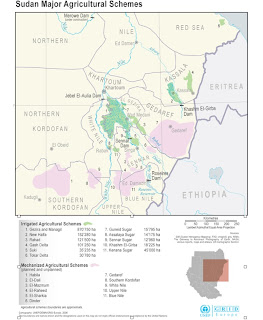 As yesterday’s post discussed, Ethiopia’s western lowlands have significant agricultural potential. The agricultural resources of neighboring Sudan, however, are much greater. Vast clay plains cover much of east-central and southern Sudan; although they are not easy to farm, their soils are fertile and they have abundant – often too abundant – supplies of water. With adequate investment, Sudan could become a major agricultural exporter. Foreign firms and governments are interested. The United Arab Emirates has recently leased some 400,000 hectares, and other outside interests have made similar deals. Sudan, many hope, will become the “breadbasket of the Arab world.”

One problem with this scenario is the fact that Sudan is only partially within the “Arab world”; over sixty percent of its people are not Arabs. Most of the recent land-leasing deals have been made in the largely Arabic-speaking east-central region, but the agricultural potential of non-Arab Southern Sudan is also huge. Southern Sudan, however, is a highly troubled place. Long the site of a determined rebellion against the central government that took some two million lives, it has been granted a degree of autonomy as well as the promise that it will be able to vote on actual independence in January 2011. Few outside observers expect this election to go smoothly. The Khartoum government does not want to lose this oil- and water-rich region, and the southern Sudanese themselves remain divided. Ethnic violence has been increasing over the past two years, leading the organization Refugees International to warn that Southern Sudan faces“total collapse.” Meanwhile, aid agencies are preparing for spikes in violence through much of Sudan as the country prepares for national elections next month, its first multiparty vote in 24 years. 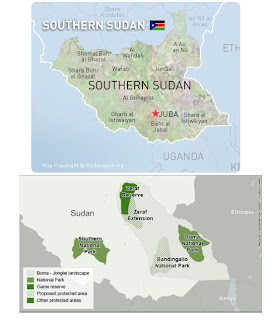 Large-scale agricultural investment in Southern Sudan is thus unlikely in the near future. But if the region does become politically stable and if agricultural development does proceed, tensions between local people and outside investors could well be pronounced. Conflicts could also emerge between farming interests and those of wildlife conservation. The global environmental community was pleasantly shocked in 2006 when new aerial surveys in Boma National Park and elsewhere revealed vast populations of antelopes, elephants, and other species of wildlife, as it had previously been thought that the region’s long civil war had destroyed most of its fauna. “I have never seen wildlife like that, in such numbers, not even when flying over the mass migrations of the Serengeti,” reported project leader J. Michael Fay. “This could represent the biggest migration of large mammals on earth.” Southern Sudan’s government is now working to protect its newly discovered wildlife, hoping to profit from eco-tourism. Political conflict, ethnic tensions, and resource development, however, present huge obstacles.