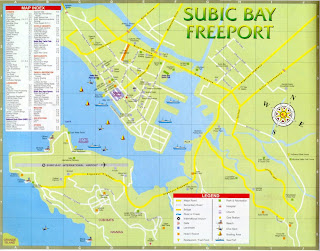 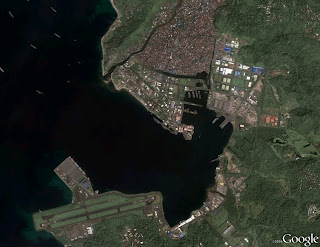 Subic Bay, located about 100 kilometers northwest of Manila, forms a superb harborage. Its waters are deep and enclosed, and the Zambales Mountains protect it from the westward-tracking typhoons that so often batter the Philippines. Overland transport to Subic, however, is difficult, delaying its naval development until the late Spanish period. In the early 1900s, the incoming American colonial administration built on the Spanish foundations, establishing both a base and a ship-repair facility. When the Philippines gained independence in 1946, the United States maintained control not just of the naval base but also the larger environs, including Olongapo City. Not until 1959 did the town and its hinterlands pass to the Philippines.

Although a superb port, Subic Bay lacks level terrain in its vicinity, presenting a hurdle to naval air power. In the early 1950s, the U.S. military undertook a gargantuan project of leveling a small mountain and filling in an adjacent section of the bay to form a runway, said to have been “equivalent to the construction of the Panama Canal.” Completed in 1956, the project required 20-million man-hours and cost $100 million. It was the largest of many infrastructural projects undertaken at Subic Bay by the United States.

When the U.S. military pulled out of Subic in 1991, it transferred much of its equipment to remaining American bases elsewhere in Asia, but the facilities that it bequeathed to the Philippines were still world-class. Many observers feared that the vacated base would be severely looted, as indeed occurred at Clark Airbase on the other side of the Zambales Mountains. 8,000 community members, however, banded together to protect the assets, estimated to be worth some $8 billion. Leadership in this movement is credited to Olongapo mayor Richard Gordon.* Gordon had already gained fame for his efforts to reduce the sex trade associated with the bases and transform Olongapo into a model city. In reward for his achievements, he was named head of the Subic Bay Metropolitan Authority, charged with transforming the port into a free-trade zone and manufacturing hub. The stakes were high, as the U.S. base had employed some 40,000 Filipinos, workers who would not have easily found jobs elsewhere in the languishing Philippine economy.

Over the past two decades, the redevelopment of Subic Bay has exceeded expectations. Hundreds of firms have established operations, and total employment is now twice what it had been when the military departed. On October 21, 2010, the Philippine government announced that, “duties and taxes collected in this free port … from January to September 2010 went up 18.7% to 5 billion [Philippine pesos], exceeding last year’s collections.”

South Korean investments have been crucial to the success of Subic Bay. Almost 200 Korean companies now operate in the free trade area. The largest Korean endeavor is the Hanjin Heavy Industries and Construction shipyard, reported to be the fourth largest shipbuilding center in the world. As of early January 2010, Hanjin had invested almost two billion U.S. dollars in the facility, and employed over 18,000 workers. Labor relations, however, are often rocky, and Hanjin has been criticized over the deaths of several of its Filipino employees.

The Korea-Philippine connection is not limited to Subic Bay. Twenty percent of the tourists arriving annually in the Philippines are South Koreans, and the figure is rising. Koreans come to enjoy cheap tropical vacations, play golf, engage in business, study, and even proselytize. The South Korean community living in the Philippines now numbers over 100,000.

In a formal study of the phenomenon, Virginia Miralao argues that the drive for English-language instruction accounts for much of the Korean interest:

The America colonization of the Philippines resulted in the establishment of military bases and the spread of English. Today, both the English-language legacy and the facilities built in Subic Bay link the Philippines more closely to South Korea than to the United States.

*Despite his name, Gordon is a Filipino; his paternal grandfather, however, was an American.