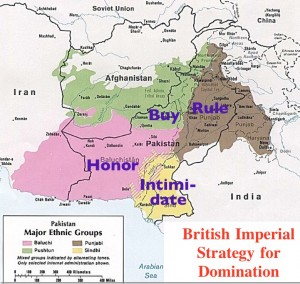 Western supporters of the Balochistan insurgency often emphasize the region’s religious moderation, arguing that an independent Baloch state would buffer Islamic extremism. Such views are of long standing; British empire-builders similarly contrasted the religious laxity of the Baloch with the stridency of their Pashtun neighbors. But religiosity varies at the individual as well as the ethnic-group level, and it often changes over time. As is true everywhere in the Muslim world, more stringent understandings of the faith have been spreading. As Paul Titus argued in 1998:*

“Baloch do not equate being Muslim with strict observance of the practices and rituals prescribed by the Shari’a. It should also be noted, however, that orthodox Islam has been promoted by some … and is a growing force in some Baloch areas.”

The thrust of Titus’s paper is the enduring significance of ethnic stereotypes in western Pakistan. Recent scholarship, he maintains, has condemned British officials and colonial ethnographers for resorting to crude cultural formulas, “essentializing” the distinctions among ethnic groups in order to bolster imperial power. Titus finds these critiques as simplistic as the stereotypes themselves. As he shows, ethnic typecasting in the region long predated the British arrival and continues to inform local relations. Coming to terms with ethnic stereotypes is necessary for understanding the region’s social and historical dynamics.

Titus begins by quoting an adage of British colonial authorities in what is now Pakistan: “rule the Punjabis, intimidate the Sindhis, buy the Pashtun, and honor the Baloch.” He goes on to examine how the stereotypes surrounding the latter two groups influenced British strategies for imposing and maintaining power.

In the conventional view, the Pashtun are individualistic, hyper-competitive, intensely patriarchal, and insistently entrepreneurial. Aggressive individualism generates an anarchic political environment, which in turn empowers religious leaders, the only individuals capable of interceding among feuding factions.** As a result, Pashtun society has turned devotedly to Islam. Weak governance among the Pashtun is also linked to an exacting code of behavior, Pashtunwali. Its informing concept of “honor” (namuz) revolves around an individual man’s ability to maintain his autonomy and to protect himself and his relations, through violence if necessary. Vengeance must be exacted—in time—against anyone who has severely trespassed against a man or his relations. Among the Pashtun, a man who cannot hold his own can be so dishonored as to be disowned by the ethnic group; in some areas, mere landlessness can deprive a man of Pashtun standing.

Baloch culture also emphasizes honor, but of a different kind from that of the Pashtun. For the Baloch, honor rests on loyalty and honesty. Dishonor does not derive from occupying a subservient social position, provided that one follows the expected modes of behavior. Such individual-group dynamics influence inter-ethnic relations. As the Norwegian anthropologist Fredrik Barth famously showed, marginalized Pashtun individuals—and even entire clans—living along the ethnic border could, and often did, “become Baloch,” readily slotted into the lower rungs of the social hierarchy. (In contrast, non-natives could almost never “become Pashtun.”) Baloch society, moreover, is conventionally viewed as hierarchical and anti-individualistic, focusing on clan and tribal solidarity. Baloch politics have historically been lineage-based, with subclans grouping together to form clans, which in turn form larger tribes, tribal confederations, and so on. Such segmentary systems are widely distributed, even among the Pashtun, but the Baloch are noted for the power that they invest in tribal leaders, the sardars.

Colonial administrators found it much easier to deal with the ranked Baloch than with the chaotic Pashtun. In the late 1800s, Britain instituted a “forward policy,” designed to bring tribal areas beyond the frontier under imperial hegemony. Such plans were frustrated in the Pashtun north, where raids on the lowlands and rebellions in the uplands bedeviled imperial power through the mid 20th century. Colonial agents responded with periodic punitive raids (“butcher and bolt”), but they more consistently resorted to bribery, paying local notables to maintain order and keep the roads open. Attempting to “buy” support, however, did not bring stability, for the Pashtun people as a whole never accepted British domination. In Balochistan, on the other hand, strong tribal hierarchies allowed more effective imperial supremacy. British agents learned how to operate in the local cultural idiom; by “honoring” Baloch leaders—after convincing them of the futility of resistance—they could generally ensure their loyalty as well as that of their subordinates. To be sure, recent scholarship shows that British Balochistan was not as harmonious as it was made out to be; tribal rebellions did occur, and were put down with force. British agents, moreover, manipulated as well as honored Baloch leaders (sardars), taking advantage of the divisions between the confederacies as well as the rifts that periodically emerged within tribal hierarchies. But overall, British policy worked much better in Balochistan than in the Pashtun areas to the north. 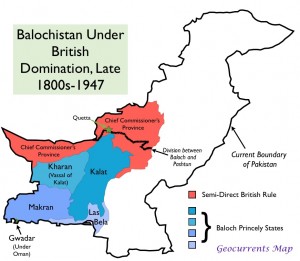 Under the Raj, Balochistan was split into five administrative divisions. Four were indigenously run “princely states,” subordinate to Britain. The largest and most powerful was the Khanate of Kalat, which held the smaller princely state of Kharan as a vassal territory. Between 1876 and 1891, British colonial agents wrested away the northern portions of Kalat (including the vital Bolan Pass), which were reorganized as the Chief Commissioner’s Province of Baluchistan, nominally under direct British power. Even here, however, rule was indirect in most places, accomplished through the manipulation of the tribal order. As can be seen in the map, much of the Chief Commissioner’s Province was Pashtun rather than Baloch, and hence less amenable to the creation of subordinate states than areas further to the south. 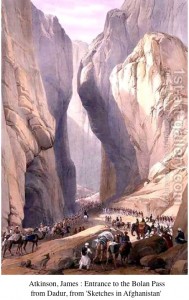 The hierarchical nature of traditional Baloch society has important implications for the current insurgency. On the one had, opposition to the government of Pakistan has been readily mobilized; whenever tribal leaders have lent their support, loyal followers have been plentiful. Partly as a result, the push for an independent Balochistan has been more insistent than that for an independent Pashtunistan.

But on the other hand, fears have been expressed that tribal leaders could be tempted to come to terms with the Pakistani government, just as their ancestors had done with the British. An entire English-language website, “Baloch Sardar Watch,” is devoted to this viewpoint. But as can be seen in the comments to this post (below), many Baloch activists think that “Sardar Watch” is a creation of the Pakistani  intelligence service, designed to undermine the movement from within. I would advise readers to pay particular attention to the comments section of this post, and I would like to thank the commentators for taking the time provide such critiques and information. GeoCurrents is devoted to the exploration of contemporary geopolitical issues, not to putting forward any particular viewpoints. I am therefore always happy to receive informed criticism.

**Although unmentioned by Titus, forms of piety have changed among the Pashtun. In earlier generations, cannabis-using Sufi mendicants complemented fiercely moralistic mullahs. That is no longer the case.