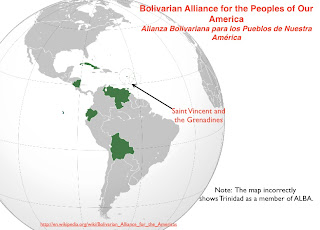 Political alliances are not always what seem, given that member states can join for different reasons. Consider ALBA, the “Bolivarian Alliance for the People of Our America,” founded by Hugo Chavez and designed to counter the influence of the United States in the Western Hemisphere. The leaders of the core ALBA countries, Venezuela, Cuba, Bolivia, Ecuador, and Nicaragua, are all noted for their anti-American rhetoric and opposition to the political and economic agenda of the U.S. The organization’s executive secretary recently framed its goals in unequivocal terms while speaking in the Venezuelan Embassy in Washington, D.C.: “The existence of the alliance has provided sorely needed relief to over 70 million people in Latin America and the Caribbean from the predatory and parasitic trade and debt relationships imposed by U.S.-led imperialism.” 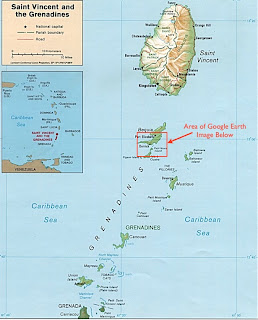 Such rhetoric, however, is not always acted upon. For Venezuela itself, the United States remains its top economic partner. And in the smaller ALBA countries, Saint Vincent and the Grenadines in particular, the anti-American agenda of the alliance means little. As The Economist explains, St. Vincent’s membership in the club follows largely from economic considerations:

Not all of [ALBA’s] members are anti-American firebrands …. Some, like St Vincent and the Grenadines, are simply small Caribbean island nations looking for friends on all sides. In 2005 Ralph Gonsalves, its prime minister, brought the country of around 100,000 into PetroCaribe, Venezuela’s subsidised-credit scheme for oil exports. Four years later he signed up for ALBA itself. St Vincent has benefited from the relationship with cheaper fuel for electricity and with machines used in the construction of a new airport. 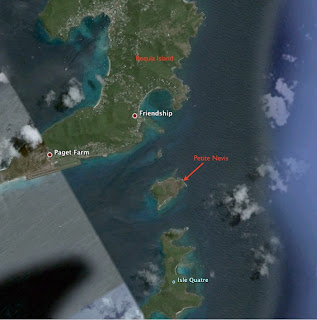 Membership in the alliance brings subsidies to cash-strapped St. Vincent and the Grenadines and allows Chavez to chalk up another member in his ostensibly anti-U.S. geopolitical block. As such, both sides see benefits to the arrangement. But Saint Vincent remains a parliamentary democracy, and Chavez’s politics have limited electoral appeal. In 2009, the country’s voters decisively rejected a plan to drop the British monarch as its official head of state, despite support for the measure from both major political parties. St. Vincent also has no desire to antagonize either the United States or the global economic elite, in part because high-end tourism has emerged as a mainstay of its economy.

Ironically, membership in ALBA enhances St. Vincent’s ability to reap profits from well-off tourists. The Argyle International Airport, under construction since 2008, is the cornerstone of the country’s economic strategy, as it will be able to accommodate the large jets needed to expand tourism. The civil engineering obstacles on the rugged island have raised the costs of the project to a staggering forty-four percent of total GDP; when the global economic crisis jeopardized funding, St. Vincent threw in its lot with ALBA. The resulting alliance has brought in the Cuban labor and the Venezuelan machinery and fuel necessary to complete the airport, promising a heightened flow of vacationers to a country that is already geared toward the top end of the market.

Wealthy tourists are attracted not so much to Saint Vincent itself as to the Grenadines, an archipelago stretching south almost to Grenada. The Grenadines include many small, idyllic islets perfectly suited for exclusive resorts. A number of the islands are privately owned, allowing privacy, seclusion, and ease for the well-heeled. A simple internet search of “St. Vincent private island” yields a number of tasteful websites promising paradise. Further development may be forthcoming. An advertisement in Private Islands Online, for example, offers Petit Nevis, a 71-acre speck of land, for a mere US$15,000,000. As the copy-writer explains:

There is a natural harbor in front of the island that is frequented by the many yachts that cruise through the Grenadines each year. The island is unoccupied and perfect for commercial development. . This part of the Caribbean is a haven for sailors and yachtsmen and some of the most beautiful boats in the world can be seen here. So, it’s a perfect location to cater to a very high-end clientele.

The future of Petite Nevis has generated controversy locally, in part because of the island’s historical role as a place to process whale carcasses. In fact, whale are still occasionally killed locally and flensed on the beach. But even if a sale of the islands brings resort development, it is unlikely that Petit Nevis’s clientele will ever be as “high-end” as that of Mustique Island, another private idyll in the Grenadines. As we shall see in the next post, Mustique is one of the most exclusive properties on the planet, a playground for the glitterati. Rather ironic that it should be located within the ALBA zone of countries ostensibly devoted to vanquishing Yankee imperialism and building “21st Century Socialism.”

*The same ironies apply to Cuba itself, where a tourism-focused economic strategy has led to the development of economic inequalities so significant that some observers describe the island’s current situation as one of “tourism apartheid.”