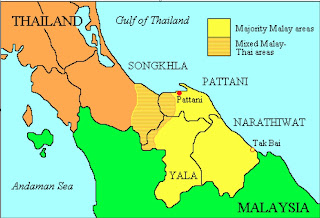 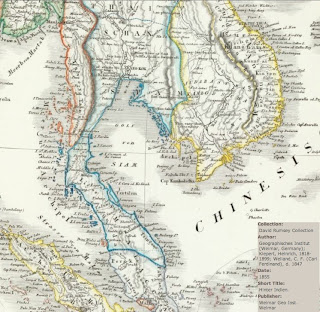 “Four Killed in Insurgency-Plagued Thai South,” reads an all-too-typical Reuters headline from February 15, 2010. The war in southern Thailand’s Pattani region is little noted in the U.S. media, but it continues to generate significant casualties – totaling almost 4,000 deaths over the last six years – as well as major human rights abuses. The Malay-speaking, Muslim, and relatively poor inhabitants of Thailand’s southernmost provinces feel marginalized and often oppressed, giving rise to an insurrection that targets not just the Thai state but also Thai-speaking Buddhist civilians. Hundreds of teachers and low-level civil servants have been attacked, many beheaded. Critics claim that the government has responded with almost equal brutality, fanning the flames of the insurrection.

Thailand’s Muslim, Malay-speaking holdings resulted from Siamese imperial expansion aimed at controlling the Strait of Malacca in the 1700s (see 1855 map above). In the late 1800s and early 1900s, Britain stripped Thailand of most of its Malay lands, but not Pattani. Pattani’s residents never fully accepted Thai power. The current rebellion, which began in 2004, remains shadowy. No specific group, let alone leader, has taken responsibility for the acts of violence, and no concrete demands have been made.

Many young men of Pattani have gravitated to an oppositional subculture marked by heavy drug use, and hard-core Islamists reportedly recruit drug-addled youths as terrorists. Although hardly noted for their Muslim piety, these young men usually avoid alcohol in favor of substances that are not explicitly banned by the Quran. Recent reports from southern Thailand highlight an unusual element in the struggle: 4 X 100, a psychoactive cocktail consisting of cough syrup, tranquilizers, carbonated soft drinks, and a tea made from the leaves of the kratom plant (Mitragyna speciosa). As Asia Times recently reported, “one captured low-level insurgent interviewed by a Thai TV reporter said that almost every youth attached to the movement … regularly used 4 X 100.”

Thai authorities think that the indigenous Southeast Asian drug kratom contributes to the problem. Kratom is illegal in Thailand, and raids are regularly carried out. It is far from clear, however, whether kratom itself is particularly dangerous, as 4 X 100 contains other ingredients as well. As one young man from Southern Thailand reported, “I’ve heard of people adding mosquito repellant or a substance from a neon light bulb…” (Media Awareness Project: Kratom Juice Cocktail the Rage with Young Muslims).

Kratom is legal in the United States – an internet search yields many sales offers – although the DEA classifies it as a “drug of concern.” The Wikipedia describes it as a “medicinal leaf” that may help in the treatment of opiate addiction. It further states that kratom is mildly addictive itself, and that it is “paradoxically a stimulant and a depressant, used to aid work and also able to contribute to sleep and rest.” One can only conclude that more research is needed. Meanwhile, kratom merchants are not only developing high-potency cultivars, but are juggling the percentages of the various mind-altering alkaloids. As the PureLand Ethnobotanicals sales catalogue notes, “Genetic differences between varieties, or strains of kratom, give rise to the formation of indole alkaloids (like mitragynine) and oxindole alkaloids in varying proportions, thus making kratom an interesting research study.”