“The issue is diplomatically sensitive because recognizing Somaliland could set a precedent for other secession movements seeking to change colonial-era borders, opening a Pandora’s box in the region.” 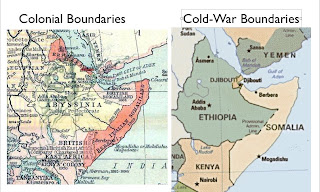 Those opposed to diplomatic recognition of Somaliland often warn that violent secession movements could break out in other countries if separatist leaders see the possibility of gaining international legitimacy. The frequently deployed Pandora’s Box metaphor attributes substantial powers to diplomatic actions: by withholding recognition from break-away states, the international community somehow keeps the malady of insurgency under constraints. But such an assertion is questionable for the world at large, and does not apply to Somaliland. When it comes to the Horn of Africa, the “Pandora thesis” makes little sense.

Since decolonization, African leaders have been especially keen to deny the legitimacy of secessionist movements, arguing that existing political boundaries must be maintained at all costs. Ironically, the devotion to the prevailing geopolitical structure rests on an acknowledgement of its unsound nature. Most African countries were established and bounded by European colonial powers oblivious to preexisting political, economic and cultural divisions; the geographical misfit between the indigenous and the imposed structures generates intractable tensions. Most African states are thus precarious, prone to ethnic and border conflicts. But any efforts to restructure the geopolitical framework to reflect the cultural fabric would be almost impossibly complicated, and, if attempted, could easily get out of hand, leading potentially to more rebellion, war, and state collapse. As a result, the granting of legitimacy to any self-proclaimed state has been viewed as a dangerous precedent, one that could lead to the general unraveling of the African geopolitical framework. Much better, the argument goes, for African countries to build new nations within their inherited borders.

Over the past half century, Pandora thesis has grown rather threadbare, yet it continues to inform policy. The idea that the mere recognition of Somaliland’s government could somehow destabilize Africa, setting off border conflicts and ethnic wars, is not credible. When applied to the Horn of Africa, it is laughable; what other ills could possible remain in Pandora’s box? Yet the notion is seldom questioned in either diplomatic or academic circles. In African statescraft, the inviolability of state boundaries remains an article of faith, and in the international order it is seldom questioned. Non-African governments, moreover, not wanting to seem imperialistic, generally defer to the African Union on such matters. As a result, or so it would seem, Somaliland remains a pariah country, unable to gain formal recognition.

But in actuality, the Pandora model, whatever its merits or faults may be, does not apply to Somaliland. Far from challenging European imperial boundaries, the recognition of Somaliland would actually reaffirm them. During the era of European domination, Somaliland was a British colony, whereas the rest of Somalia was under Italian rule. Here, it was the union of the two colonies in 1960 that changed colonial-era boundaries, not the proclamation of Somaliland’s independence. In addition, Somaliland’s leaders are not seeking to establish a new state, as their government is almost two decades old. And rather that seceding from a functioning state, Somaliland assumed independence as Somalia collapsed. In recent years, Somalia has existed more in the minds of diplomats than in reality, whereas in Somaliland the opposite conditions have obtained.

The insistence on the colonial-era map more generally stumbles on the fact that boundaries periodically shifted under the European rule. In 1925, for example, Britain transferred Jubaland, then part of British East Africa (Kenya), to Italian Somalia, ostensibly to reward Italy for its participation on the allied side during World War I. One might therefore argue that it is not so much colonial boundaries as those of the immediate post-colonial period – when a unified Somalia did exist – that should be regarded as sacrosanct. But here too, the logic fails. In 1993, the international community accepted the independence of Eritrea from Ethiopia, reinscribing the map of the colonial period, when Eritrea had been an Italian possession while Ethiopia remained independent. It thus appears that European colonial boundaries apply everywhere in sub-Saharan Africa except Somaliland. If one were to follow established precedent consistently, Somaliland would have to be accepted as a sovereign state.

The Somaliland quandary reveals the pretence that lies at the heart of diplomatic practice. A certain amount of dissimulation is of course necessary in international relations, but in this case it is taken to almost comical extremes. After almost two decades of chaos, the possibility of a united Somalia reemerging as a stable country seems vanishingly slight, yet diplomats cling to the idea, refusing even to consider alternatives. As a result, double-speak becomes necessary. As the informed comments of Somalilandersister show (posted on this blog on May 12), Ethiopia in practice fully recognizes Somaliland’s sovereignty, yet the Addis Ababa government must pretend that it does not in order to follow the general consensus.

Undue significance is attached to the ideal world concocted through the international system of mutual state recognition. Is it even reasonable to argue that the mere acknowledgement of Somaliland could somehow strengthen separatism elsewhere in Africa? Did the international acceptance of Eritrea in 1993 embolden secessionist movements elsewhere with the lure of geopolitical legitimacy? I have difficulty imagining rebel leaders rallying their troops by invoking foreign diplomats acknowledging foreign governments. If anything, post-Cold War global history demonstrates the opposite phenomenon; the periodic recognition of new sovereign states has had little impact in other areas. The separation of East Timor from Indonesia did not open a Pandora’s box of separatism in Southeast Asia any more that that of Eritrea did in Africa.

The Pandora thesis exaggerates the significance of the formal structures of global politics. As such, it flatters the egos of politicians and diplomats, endowing their actions with powers that they do not possess. Such a disconnection from reality can have negative consequences, as the people of Somaliland can well attest. The international snubbing of Somaliland’s government has generated intense anger in the country and among its expatriates, as some of the comments to last week’s Geocurrents postings indicate. Although I was disappointed that several commentators interpreted my essays as showing hostility toward Somaliland, I can certainly understand their frustration with the outside world and its refusal to acknowledge their successful efforts at state-building in the region of the world where it is most desperately needed.