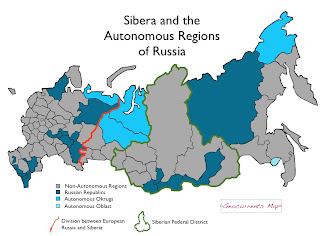 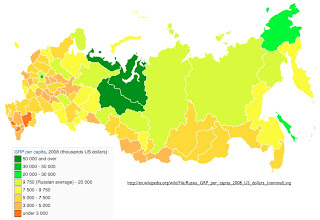 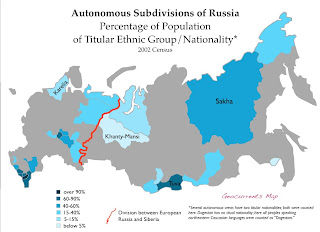 Just as a state-based vision of the world exaggerates the distinctiveness of small countries, so it masks difference within large countries. When macro-countries like Russia, China, or the United States are mapped as singular units, vast disparities between their constituent areas vanish from view.

The public view of massive Russia is especially distorted by the state-based world model. For starters, many people fail to grasp how much larger Russia is than other independent states. Informal polling bears this out. When I recently asked a group of educated Americans how they thought Siberia compared in area to the world’s largest countries, most respondents put it fairly high on the list – but no one put it first. In fact, a sovereign Siberia would be the world’s largest country by a substantial margin, as big as Canada (#2) and India (#7) combined. My respondents did no better when it came to estimating Siberia’s population ranking. Most thought that it would be very low on the list, out-numbered by more than 100 sovereign states. In actuality, Siberia’s 39 million inhabitants would put it 33rd in the world, proximate to Poland and Argentina and well ahead of Canada. Although my poll was hardly scientific, it confirmed my sense that even educated Americans have a very dim understanding of Russian geography.

Historically speaking, the most important divide in Russia is the crest of the Ural Mountains, which separate European Russia from Siberia. Russian culture originated in European Russia; not until roughly 1600 did Moscow push eastward across the Urals (although once it did so, expansion was rapid, reaching the Pacific in about eighty years). Supposedly the distinction between the two parts of Russia is of continental significance, as Siberia forms the northern extent of Asia in the conventional depiction of the world’s major landmasses. Placing the continental divide along the Urals, however, is a relatively recent innovation. Originally, the Don River – the Tanaïs of the ancient Greeks – of southwestern Russia separated Europe from Asia. In the 1700s, an alternative division line was sought, and a Swedish military officer named Philippe-Johann von Strahlenberg proposed the Urals. Russian geographers readily agreed, wanting to place the core areas of the Russian state firmly in Europe while consigning the more recently conquered eastern land to Asia, conceptualized as a quasi-foreign land suitable for colonial rule and exploitation.

Siberia retains certain aspects of its colonial past. It is much less densely populated than European Russia, with most inhabitants concentrated along its southwestern front. Although Siberia contains roughly three quarters of Russia’s territory, it holds only about a quarter of its population. “Asian” Russia also encompasses a large array of indigenous ethnic groups, and counts as well Russia’s largest internal republics and other autonomous areas. The Republic of Sakha alone is almost as extensive as the whole of European Russia.

It would be a serious mistake, however, to regard Siberia as any less Russian that European Russia. It may have been a colonial realm in the 1600s and 1700s, but massive settlement by Russian speakers subsequently transformed the region. Today, Siberia is substantially more Russian than European Russia in terms of its population. In the country as a whole, Russians* constitute 80 percent of the population; for Siberia, the figure is over 90 percent. A significant number of indigenous ethnic groups live in Siberia, but most are very small and many are close to extinction. The largest Siberian group, the Sakha (or Yakut), number only about half a million.

The map of republics and other autonomous areas in Russia may convey a misleading view of nationality/ethnicity in the country. Although such areas have been differentiated on the basis of their non-Russian indigenous populations, they have never been off-limits to Russian and other migrants. As a result, some areas classified as autonomous have very small indigenous populations, or “titular nationalities.” In the Khanty-Mansi Autonomous Okrug, the Khanty and the Mansi together form only about two percent of the population, whereas Russians account for sixty-six percent, Ukrainians nine percent, and Tatars seven percent. Not coincidently, Khanty-Mansi is the richest unit of the Russian Federation, with a per capita GDP of over $50,000. Overall, as the economic map shows, resource-rich Siberia has a distinctly higher level of per capita GDP than European Russia.

The final map posted above shows the percentage of each autonomous region’s population that belongs to the ethnic group for which it is named (i.e., its titular nationality). The indigenous peoples of Siberia are generally far outnumbered in their own republics by Russians and other groups originating in the west. Tuva is the only exception; the Tuvans constitute 77 percent of the republic’s residents. The situation is not the same in European Russia. To be sure, fewer than ten percent of the residents of the Republic of Karelia are Karelians, but in the republics of the Caucasus, locally rooted peoples generally retain majority status. In Chechnya, for example, some 94 percent of the people are Chechen. In neighboring Ingushetia, more than three-quarters are Ingush, and almost all of the rest are Chechen, with Russians accounting for fewer than two percent of the total population. The six republics of the Middle Volga vary on this score; the ethnic situation in this area is quite complicated, as we shall explore in subsequent Geocurrents posts.

*By “Russian” I mean “Russkie” rather than “Rossijane”: see last Saturday’s Languages of the World blog posting.