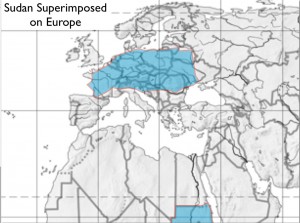 Few ideas are as intellectually pernicious as notion that the citizens of a given sovereign country necessarily share the bonds of common nationhood. As evidence of the confusion that this idea generates, consider Russell Jacoby’s important recent article in the Chronicle of Higher Education, entitled “Bloodlust: Why We Should Fear Our Neighbors More Than Strangers” (adapted from Bloodlust: On the Roots of Violence From Cain and Abel to the Present [2011, Free Press]).  Jacoby is a fine writer who has made significant contributions to intellectual history, and his essay is illuminating. But it is also compromised by the myth of the nation-state.

Jacoby starts out by pointing out that we often assume violent conflicts are most intense and intractable when they take place between societies, especially between two communities that hail from distinct “civilizations.” Foreign opponents are readily dehumanized as alien beings, beyond the pale of moral consideration. Yet in practice, he goes on to claim, the most fierce and protracted struggles occur not between but within societies. Here is how he puts it:

The most decisive antagonisms and misunderstandings take place within a community. The history of hatred and violence is, to a surprising degree, a history of brother against brother, not brother against stranger. From Cain and Abel to the religious wars of the 16th and 17th centuries and the civil wars of our own age, it is not so often strangers who elicit hatred, but neighbors…. We don’t like this truth. We prefer to fear strangers…. The notion of colliding worlds is more appealing than the opposite: conflicts hinging on small differences.

So far so good. It is certainly true that civil strife can be appallingly brutal. Apt examples (which he cites) include the Lebanese Civil War, the Bosnian conflict, and the Rwandan genocide; all involved people who had previously lived together in mixed communities. But other instances adduced by Jacoby do not fit the model, and some actually indicate the opposite tendency.

Jacoby’s thesis fails most glaringly in Sudan, which he reference on several occasions. In arguing that civil wars last longer than other conflicts, Jacoby notes that “the conflicts in southern Sudan have been going on for decades.” Elsewhere he writes, “Today’s principal global conflicts are fratricidal struggles—regional, ethnic, and religious: Iraqi Sunni vs. Iraqi Shiite, … Sudanese southerners vs. Sudanese northerners” (emphasis added). The implication is that because the southern and northern opponents are all Sudanese, they are “brothers” engaged in “fratricidal” warfare. “Likeness does not necessarily lead to harmony,” Jacoby concludes. In the end, he asks, “Why do small disparities between people provoke greater hatred than the large ones?”

But it is more than “small disparities” that distinguish the southern and northern Sudanese. While it is problematic to divide the people of Sudan into two groups to begin with (where does that leave the people of Darfur?), the chasm between these southern and northern groups is profound. The Nuer, the Dinka, and other Sudanese southerners have very little in common with the Arabic-speaking, politically dominant population of northern Sudan. Their languages are completely unrelated, their religious affiliations have no commonality, their customs, lifeways, and diets are not at all similar, and they vary significantly in physical appearance and genetic make up. All they share is co-residence within a set of national borders—a map that was imposed by outsiders and has never been accepted as legitimate in the south. By what token could these two feuding groups possibly be regarded as sibling peoples locked in fratricidal violence?

Issues of geographical scale come into play as well. Southern and northern Sudanese are in no meaningful sense “neighbors;” the distances between them are vast. To illustrate, I have taken an equal-area world map (the Peters projection), outlined Sudan on it, and then superimposed the resulting image on Europe. This simple exercise reveals that southern Sudan alone occupies an area roughly equivalent to France, in relation to which Khartoum lies approximately in Slovakia, and far northern Sudan would be situated in central Ukraine. Considering the rudimentary transportation infrastructure, the effective distances are actually much greater in Sudan than in Europe. While we rarely regard the peoples of southern France and central Ukraine as “neighbors,” in the case of Sudan we are misled by the myth of the nation-state.

The Sudanese war came to an end in 2005, when a deal was brokered that would allow the South to vote on separation in early 2011. In the resulting election, over 95 percent of Southern Sudanese voters opted for independence. If the Khartoum government honors its promises, Southern Sudan will emerge as a fully sovereign country later this year. Will further conflict between north and south then cease to be treated as “fratricidal,” and instead come to be seen as a conventional war between different societies? On the other hand, if the Sudanese government reneges on its promises, should we then continue conceptualizing the conflict as a battle between brothers, motivated in their hatred by “small differences?”