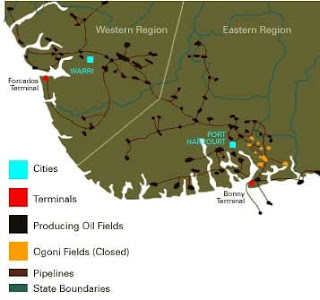 Few of Africa’s many insurgent groups receive much notice in the global media. One way they can get attention is to attack the infrastructure of oil production. Thus the Movement for The Emancipation of the Niger Delta (MEND) found itself in headlines on January 30, 2010, after breaking its truce with the Nigerian government and sabotaging an oil pipeline. A day later, crude oil jumped 1.3 percent (95 cents a barrel)—after having declined by 8.3 percent in January.

The truce between MEND and the Nigerian government, dating only to October 2009, never seemed particularly secure. MEND leaders demanded quick action to address the needs of the poor but oil-rich Niger Delta. Rapid response, however, is not a hallmark of the Nigerian government—especially now, as president Umaru Yar’Adua is ill and missing from action. Before breaking the truce, a MEND leader expressed his frustration in clear terms: “General Abbe, the current defence minister and his cohorts, rather than encourage the government of Nigeria to address the core issues as demanded by true agitators for justice in the Niger Delta, are still inaugurating one dubious committee after another in a bid to continue stealing funds supposedly allocated for the development of the Niger Delta” (see “Niger Delta’s Endless Planning,” by Ifeatu Agbu. http://allafrica.com/stories/201001270657.html) 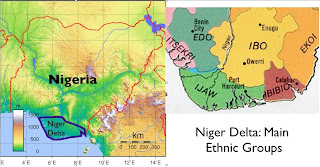 MEND is an amorphous umbrella organization for a number of insurgent groups operating in the Niger Delta. Nimble and decentralized, MEND has adopted “open-source” tactics relying on ad hoc recruitment from criminal gangs and local cults to conduct hit-and-run raids. MEND actions are brutal but its grievances are real. The Niger Delta, the main source of Nigeria’s wealth, is characterized by extreme poverty, political marginalization, and environmental despoliation. Earlier non-violent resistance movements were not successful. In 1995, the then-dictatorial Nigerian government hanged Ken Saro-Wiwa, a nationally noted author and television personality, after he organized a peaceful protest through the Movement for the Survival of the Ogoni People. A peaceful resistance movement would have a better chance against today’s basically democratic government.

Nigerian culture and politics are sometimes portrayed too crudely as bifurcated between the Christian south and the Muslim north. To be sure, religious tensions are a major issue in much of the country, particularly in the central Jos region. But the situation in the Niger Delta is different. The Ijaw, who form the bulk of MEND’s support, are a primarily Christian group some 15 million strong, yet one of their heroes is the imprisoned and devoutly Muslim militant, Alhaji Mujahid Asari-Dokubo. Raised a Christian, Asari-Dokubo converted before founding another local insurgent group, the Niger Delta People’s Volunteer Force.

In the delta, more important than religious conflict is the region’s intricate ethnic geography. The standard ethno-linguistic map of Nigeria, a portion of which is reproduced above, is highly simplified, concealing staggering ethno-linguistic diversity. According to Ethnologue, some 47 distinct language groups are found in the central delta area. Nigeria’s southeastern corner is more diverse still. (See http://www.ethnologue.com/show_map.asp?name=NG&seq=110). Rivalries here sometimes become violent. In the late 1990s, for example, the Ijaw and the Itsekiri fought a minor war, the “Warri Crisis.” Whether inter-ethnic violence will be reignited in the current crisis remains to be seen.