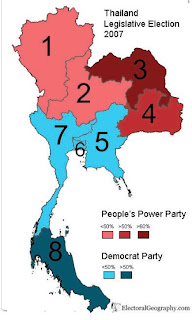 Maps of Thailand’s 2007 legislative election clearly show that the pro-Thaksin redshirt movement currently threatening the government has regional as well as economic foundations. In Electoral District 3, which covers much of the northeastern Isan region, the Thaksin-affiliated PPP party received over 66 percent of the vote, while the anti-Thaksim Democrat party received less than 14 percent; in Electoral District 8, which covers southern Thailand, the PPP received only 8 percent of the vote, while the Democrats received almost 80 percent. Although southern Thailand is wealthier than the Isan region, it is largely agricultural and not particularly prosperous. The per capita GDP of Surat Thani, the largest province of the south, is less than half that of Thailand as a whole – and Surat Thani it is the second richest of the south’s 14 provinces.

Religion may have something to do with the south’s antipathy to the redshirts. Southern Thailand has a substantial Muslim population, and the Thaksin regime was noted for its harsh military approach to the long-simmering Islamic insurgency of the far south. But most of southern Thailand is actually dominated by Thai-speaking Buddhists; the Malay-speaking Muslim population is concentrated in the four southernmost provinces. Intriguingly, it was the Buddhist majority provinces of Electoral District 8 that voted most strongly for the anti-Thaksin Democrat Party.

Thailand’s Buddhist-Muslim divide may be playing into the current struggle in a different manner. Although Islam in Thailand is commonly associated with the Malay-speaking areas of the extreme south, a recent report issued by the Thai Ministry of Foreign Affairs claims that more than 80 percent of the country’s Muslims live elsewhere. Many are Thai-speakers residing in the greater Bangkok area. Although official statistics maintain that fewer that five percent of Thailand’s people practice Islam, some observers think that the actual figure is much higher. Thai-speaking Muslims tend to be hostile to the redshirt movement, and correspondingly supportive of the ruling Democrat Party.

A recent report in the ethnic news site New America Media by Japanese investigative journalist Yoichi Shimatsu highlights a possible religio-economic dimension of the present conflict. Thailand’s Democrat Party, Shimatsu argues, “is increasingly reliant … on the ‘river Muslims’ of Bangkok,” a group that purportedly dominates informal commerce and smuggling along central Thailand’s numerous waterways. Shimatsu claims that these ethnic economic networks were targeted by former Prime Minister Thaksin as part of his “war on drugs” campaign. As a result, according to his report, the so-called River Muslims are now mobilizing against the Thaksin-inspired redshirt movement. Shimatsu warns that such a dynamic could provoke a massive Buddhist backlash: “Unless the elite yields its untenable privileges and accepts a secular democracy, populist Buddhist militancy will radically alter the political and demographic landscape. The Land of Smiles could soon become a vale of tears.”