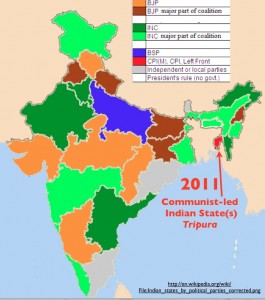 India’s regional elections in early May 2011 saw the devastating defeat of the far left. After having ruled the 91-million-strong state of West Bengal for thirty-four years, the Communist Party of India (Marxist) [abbreviated as CPI(M)] lost 146 seats in the Legislative Assembly, retaining only 42. In what could be an epochal loss, the larger Left Alliance coalition did not win a single West Bengal district. The communists were also defeated in Kerala in the southwest—a long-time stronghold sometimes called Red Kerala. Only one Indian state, tiny Tripura in the northeast, currently has a communist government. In Tripura’s most recent legislative election (2008), the CPI(M) took forty-six of sixty seats, giving it its fourth consecutive term in power.

Soon after the routing of their fellows in West Bengal, Tripura’s Marxist authorities found themselves in hot water. On May 24, leaders of the opposition Congress Party vowed to undergo a hunger strike to protest “the replacement of Mahatma Gandhi’s name with Communist icon Vladimir Lenin in a Class 5 textbook.” Communist leaders countered that the discussion of Gandhi was simply moved to a different chapter. Congress Party activists were not mollified, arguing that the state’s textbooks more generally suffer from a “huge distortion of facts,” and are aimed at “brainwashing school students in line with Marxism.” 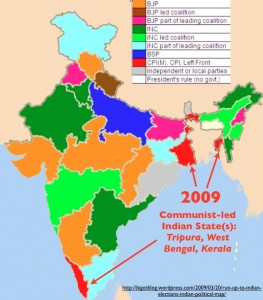 Tripura is a distinctive state. We have already noted its near engulfment by Bangladesh, giving it an unusually long andtroubled international border. Like its neighboring Indian states to the north and east, Tripura has long been plagued by ethnic tension and insurgency, although at present rebel activity is minimal. Disruptive protests commonly occur, however, and are sometimes violent. In late May 2011, authorities aimed water cannons at representatives of the Tripura Pradesh Youth Congress gathered in front of a police station. The demonstrators, affiliated with the mainstream Congress Party, were protesting the recent assault on one of their leaders by members of a rival student organization, the communist-linked Student’s Federation of India. According to the Times of India, the resulting imbroglio brought “rain-soaked Tripura to a complete standstill.” 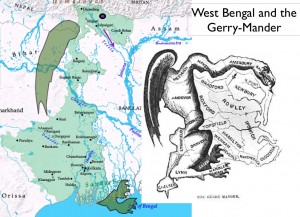 Unrest in Tripura is linked to the partition of British South Asia in 1947 and the subsequent independence of Bangladesh. Partition broke up the Bengali-speaking region, one of the world’s largest cultural areas; with some 250 million speakers, Bengali is usually counted as the sixth mostly widely spoken language on earth, surpassing Portuguese, Russian, Japanese, and German. In 1947, the Hindu-majority Bengali districts of the west and north went to India, forming West Bengal, while the eastern zone went to East Pakistan, later Bangladesh. (The oddly shaped West Bengal evokes the original “Gerrymander,” as illustrated by the image to the right.) Several million Hindus eventually fled East Pakistan, most settling in West Bengal. Hundreds of thousand, however, headed east into what had been the princely state of Tripura, a minor kingdom under British dominion. As a result, Tripura’s demographic balance underwent a tectonic shift; Bengalis, previously forming around twenty percent of the population, were catapulted to majority status with roughly seventy percent. If effect, Tripura became a third political unit of divided Bengal.

The flow of Hindu Bengali refugees into Tripura was not welcomed by the culturally distinctive indigenous inhabitants. Most local ethnic groups, including the once-dominant Tripuri, speak Tibeto-Burman languages and are historically linked to the peoples of what is now south-central China. Resentment against the newcomers led many indigenes to join one of the twenty-plus insurgent groups that made Tripura a bloody mess in the late twentieth century, as we shall see in a later post.

The “Bengalization” of Tripura also brought about a political transformation of the state, placing it firmly within the communist camp. In the early 20th century, educated Hindu Bengalis—who often styled themselves as the intellectual elite of India—generally embraced Marxism as a cerebral yet potent anti-colonial philosophy. Bengali Muslims, in contrast, generally espoused much more conservative beliefs. The migration of Hindu Bengalis into Tripura thus brought the local branch of the Communist party to power. West Bengal, as we have seen, witnessed the collapse of the communist vote in 2011; it remains to be seen whether Tripura will follow suit. 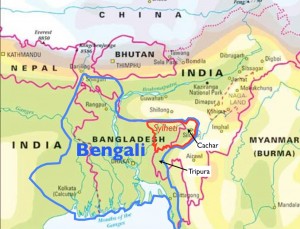 Although conventional depictions of the Bengali region divide it east from west, Bangladesh from India, in actuality the Indian parts of greater “Bangla-land” almost surround Bangladesh. The eastern Bengali-speaking zone includes not only Tripura, but also Cachar district of southern Assam, site of the state’s second city, Silchar. In the north are the often over-looked districts of West Bengal’s “beak,” including Cooch Behar and its enclave-ridden border.

The internal coherence of this greater Bengali region, however, is itself suspect. The historical Sylhet region, including India’s Cachar and adjoining districts and Bangladesh’s Sylhet Division, is often excluded from the realm. The Sylheti tongue is not fully inter-intelligible with standard Bengali, and is thus often considered to be a separate language. Heavily influenced by Assamese, Sylheti was formerly written in its own script. Under the British, the entire Sylhet region was administered as part of Assam; it too was spit with partition, with the Muslim-majority west going to East Pakistan (hence Bangladesh), and the Hindi-majority east staying with Assam in India.

Also of interest is the fact that the substantial Bangladesh immigrant community in Britain is mostly Sylheti—ninety-five percent according to some sources. Relations between Sylhetis and other Bangladeshis in London are strained, as demonstrated in a fascinating 2008 internet discussion thread entitled “Why Do Dhakaiyas Hate Sylhetis So?” (“Dhakaiyas” are people from Dhaka, or more generally non-Sylheti Bangladeshis.) Muslim Sylhetis have a reputation for being much more devoted to fundamentalist interpretations of their faith than other Bangladeshis, a trait that has been linked to religious tensions in London’s Muslim-majority neighborhoods.