Radicalism and the Divisions of Punjab 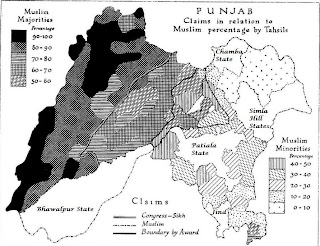 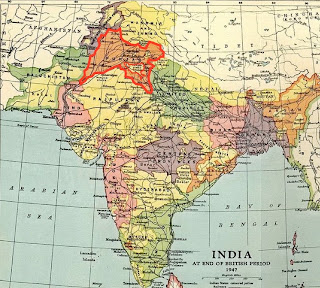 The greater Punjab region rarely appears on maps, as it spans the border of India and Pakistan. Before independence in 1947, Punjab was an extensive province under direct British rule. Britain acquired the territory in the mid 1800s by vanquishing the Sikh Empire; enclaves under indirect rule (in yellow on the second map above) were the remnants of indigenous states that had sided with the British East India Company against the Sikh Empire. British-ruled Punjab was religiously divided among Muslim, Hindu, and Sikh populations. Assigning Muslim-majority districts to Pakistan and non-Muslim majority areas to India was no easy task (see the first map above). In the partition of Punjab in 1947, hundreds of thousands of people were slaughtered as almost all Sikhs and Hindus were forced out of western Punjab, which went to Pakistan, and as almost all Muslims were driven out of eastern Punjab, which went to India.

After independence, eastern Punjab was eventually partitioned among several Indian states, largely on linguistic lines. The Hindi-speaking southern districts eventually became the state of Haryana, while the mountainous terrain in the northeast became the state of Himachal Pradesh, leaving the Punjabi-speaking zone along the border with Pakistan as the Indian state of Punjab. All three Indian states of the former British Punjab have achieved relatively high levels of social and economic development, as was discussed several weeks ago in Geocurrents. The Indian state of Punjab itself, however, remained politically tense and subject to violence through the 1980s, due largely to the demands of Sikh separatists for their own country. Although the region has been peaceful for several decades, a few voices still call for the creation of a separate sovereign state of Khalistan. 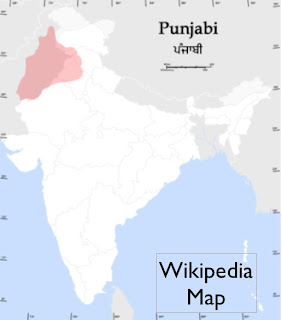 On the Pakistani side of the border, Punjab remains an undivided province. With more than 81 million people, it is the demographic core of the country, containing roughly half of Pakistan’s population. If it were independent, it would be the world’s fourteenth most populous country. Conventional maps of language and ethnicity, like that from the Wikipedia posted above, portray Pakistan’s province of Punjab as almost entirely Punjabi-speaking. In this view, the Indian state of Punjab and the Pakistani state of Punjab together form the Punjabi cultural area; here people may be divided by religion and nationality, but they remain united by language and other aspects of common culture, such as music and cuisine. 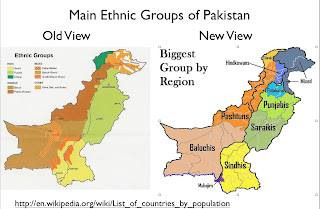 In recent years, however, it has become clear that Pakistani Punjab is not culturally united. Most linguists now claim that the dialects of the south together constitute a distinctive language of their own, known as Saraiki (see the final map posted above). The people of this area are separated from those to the north by a variety of cultural and institutional features, and they are increasingly demanding recognition. According to the Wikipedia, “The development of the standard written [Saraiki] language, a process which began after the founding of Pakistan in 1947, has been driven by a regionalist political movement.” Estimates of the number of speakers of Saraiki in Pakistan range from 14 to 40 million, depending on where the language is bounded. The latter figure would make it one of the top 30 languages of the world.

In geography, scale always matters. While it is often tempting to generalize about large regions, the more one focuses in, the most complex – and interesting – the patterns generally become.