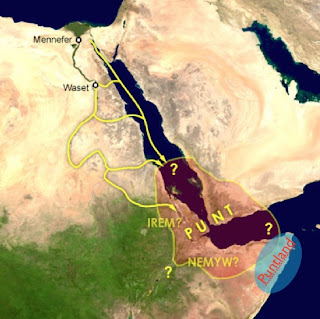 By naming their state “Puntland,” the leaders of autonomous northeastern Somalia evoke a storied history. The Land of Punt was a key trading partner of ancient Egypt from roughly 2,500 BCE to 1000 BCE. Punt provided rare goods for the Egyptian elite, including aromatic gums (especially myrrh and frankincense), gold, ivory, and wild animals. Expeditions to Punt excited the ancient Egyptian imagination, evoking adventure and exoticism. But around 1000 BCE connections were lost, after which the Land of Punt faded into legends, its exact location lost.

Scholars have long sought to locate the Land of Punt. Ancient Egyptian sources show that it was reached by sailing down the Red Sea. Most studies point to the southern Red Sea-Gulf of Aden region, including the adjacent highlands on either side of the waterway. The southwestern Arabian Peninsula, however, is hard to square with Punt’s export of ivory and other animal products. An African location is thus suggested, probably in Ethiopia, Eritrea, or Somaliland. Note that modern Puntland lies at the extreme margin of the general area hypothesized as the possible Land of Punt.

In early May 2010, the San Francisco Chronicle reported that scholars are honing in on Punt’s location through the genetic analysis of mummified monkeys. Baboons, say the researchers, “were among the most important commodities brought back to the pharaohs from Punt, but until now no one has known where those baboons came from.” Matching ancient and modern baboon hair samples indicate that the Land of Punt was probably situated in modern Eritrea and northern Ethiopia.

The autonomous state of Puntland, it appears, is not located in the same place as the ancient Land of Punt. Puntland is not alone in being misplaced from its namesake. Several African countries are named for illustrious kingdoms that were situated elsewhere. Modern Ghana is far from the medieval Ghana Empire, which was in modern Mali and Mauritania. The original Benin, famed for its bronzes, was located in Nigeria, not Benin. The modern state of Benin, however, officially derives its name not from the former kingdom but rather from the bight: the country formerly known as Dahomey fronts on the stretch of the Atlantic called the Bight of Benin (“bight” generally meaning a curved coastline).