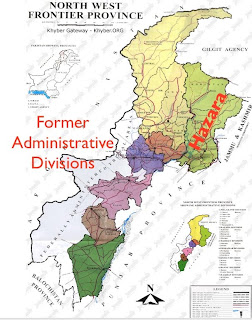 A bill to change Pakistan’s constitution, largely by reducing the extensive powers of the presidency and increasing provincial autonomy, has been working its way through parliament. The proposal has broad support; President Asif Ali Zardari is extremely unpopular, as were his immediate processors. One seemingly innocuous amendment to the bill, however, has proved bitterly divisive: the renaming of the Northwest Frontier Province (NWFP) as Khyber Pakhtoonkhwa (generally translated as “Khyber side of the land of the Pakhtuns”). On April 13, 2010, anti-“Pakhtoonkhwa” rioting broke out in several cities in the Hazara area of the NWFP. Protesters attacked a police station, blocked roads, and threw stone at the police; at least six people died in the resulting violence.

The Northwest Frontier Province, dominated by Pashtun (Pakhtun) tribal groups, has long been a troubled and relatively anarchic region. Many Pashtuns resisted incorporation into Pakistan in 1947, seeking to create an independent “Pashtunistan.” The secession movement died down, but the yearning to politically acknowledge Pashtun identity remains strong – as does the desire to jettison the ungainly colonial designation “Northwest Frontier.” Considering how restive the Pashtun region of Pakistan remains, torn apart by the Taliban insurgency and Pakistani military reprisals, a provincial name change might seem a small and reasonable concession. 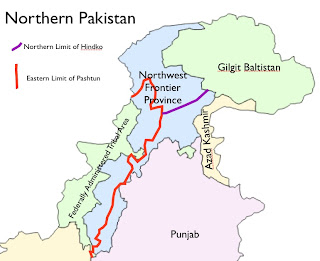 The problem with the “Khyber Pakhtoonkhwa” formulation is that around a third of the province’s people are not Pashtun – and many of them fear Pashtun domination. As can be seen on the map above, languages other than Pashtu are spoken across most of the NWFP. Rioting has been confined to the northeast, homeland of the Hindkowan ethnic group. Hindkowans speak Hindko, a significant though generally overlooked language, with some 2.4 to 4 million speakers. Hindko, a north Indian language related to Punjabi, predates Pashtu in most of the region; Pashtuns have been pushing to the east for hundreds of years, spreading their language and culture. Bilingualism is common and ethnic identity can be rather fluid. Overall, however, the Pashtu language of the Pashtuns has been advancing as Hindko retreats, much to the distress of Hindko partisans. 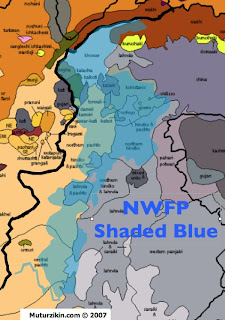 The Hindkowans have remained virtually unnoticed by the outside world. Their language does not appear on standard linguistic maps, and they are rarely mentioned in academic discussions of Pakistan. In Pakistani national circles, Hindko has been seen as an insignificant local dialect. Such attitudes have not been appreciated by the Hindkowans. In the early 1990s, local activists formed the Gandharan Hindko Board to promote their language and culture, and in 2003 the first Hindko dictionary was released. Hindko is now emerging as a literary language, with a significant output of poetry.

The Hindko heartland is the former administrative division of Hazara, a sub-unit of the NWFP that was disbanded – along with Pakistan’s other divisions – in 2000. Fearing that the proposed strengthening of provincial powers will further reduce their autonomy, Hazara’s Hindokwans are now pressing for a complete separation from the Northwest Frontier Province and its Pashtun majority. Their chances may be good; almost as soon as rioting broke out on April 13, the leader of the country’s main opposition party, the Pakistan Muslim League (Q), came out in favor of hiving off a separate Hazara province.

The underlying problem is fractal in structure. Within almost any ethnically defined territorial entity, smaller areas propound their own identities, while in those smaller areas, still smaller areas do the same.