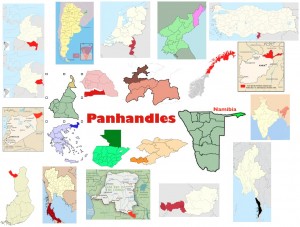 Of the world’s many geopolitical “panhandles,” that of Oklahoma best fits the term: the state is indeed shaped like a pan with a well-defined handle. In regard to sovereign states, Namibia seems to sport the clearest handle, although the rest of the country looks more like a deep pot than a pan. At any rate, you can judge for yourself from the maps posted here.

Namibia’s panhandle, the Caprivi Strip, has had its share of strife. Grafted onto the country through the geopolitical machinations of colonial powers, it has few organic linkages with the rest of the country. Insurgency in the Strip spiked around the turn of the millennium, while ethnic tension and resentment of the state remain pronounced. Yet in recent years Caprivi has been relatively peaceful and Namibia as a whole has done quite well, generating some optimism for the region’s future. Tourism is seen as promising, a view bolstered by the recent creation of the Kavango-Zambezi Transfrontier Conservation Area (KAZA), a California-sized eco-management zone. Today’s post will focus on the Caprivi Strip itself; subsequent posts will examine the broader geohistorical context as well as the KAZA initiative. 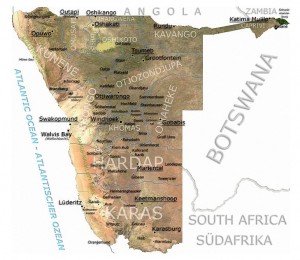 Caprivi Strip owes its existence to the ambitions of German colonial officials in the late 1800s. In the early 1880s, Germany was staking out claims in southwestern Africa—Deutsch-Südwestafrika—the area that would become Namibia in 1990. Foreseeing transcontinental trade, German agents sought a bridgehead on the mighty Zambezi, which flows eastward through Mozambique. River-borne commerce from Southwest Africa to the Indian Ocean was never a realistic possibility—Victoria Falls stands in the way—but German officials were adamant. Their plans came into conflict with British designs, particularly those of the Cecil Rhodes. All differences were ironed out, however, in the Heligoland-Zanzibar Treaty of 1890, which gave Germany the Caprivi Strip and the small but strategic island of Heligoland in the North Sea in exchange for a German protectorate in what is now Kenya and, more importantly, free reign in the Sultanate of Zanzibar, offshore from Germany’s expanding holdings in eastern Africa (Tanganyika).

German colonialism in southern Africa was short-lived but brutal—marked by campaigns of genocidal ferocity against the Herero and Namaqua peoples. The focus of the violence, remained to the southwest of Caprivi; the Strip itself was so remote and unhealthy that the Germans barely established a presence. After World War I, the League of Nations mandated the colony to South Africa, then a self-ruling dominion of Britain. During the South African period, Caprivi was efectively split from the rest of Southwest Africa. Administered first from Britain’s Bechuanaland Protectorate (Botswana’s predecessor), it later fell directly under the South African government in Pretoria.

By 1964, anti-colonial anger gave rise to the Caprivi African National Union (CANU), dedicated to ending the South African regime. CANU soon joined forces with SWAPO (South West Africa People’s Organization), the main Namibian insurgent group. The terms of the union remain controversial. As framed by the Guide to Namibian Politics, “Caprivi separatists argue that independence for the north-eastern region was envisaged in the deal, but Swapo denies any suggestion that eventual secession from Namibia was one of the agreed terms.” As the guerilla war pitting SWAPO against South Africa intensified, South African forces turned to the remote Caprivi Strip as a rear-base. Wars in neighboring Angola and Zimbabwe further impinged upon the region, with soldiers from several conflicts crossing the border. Such entanglements, not surprisingly, further destabilized and militarized the region.

Calls for Caprivi’s autonomy or even independence continued to be made throughout the struggle for Namibian sovereignty, and they intensified not long after independence. Caprivi had not previously been administered by Windhoek—but now it was. The Strip remains, moreover, the least developed part of Namibia, a resource-rich and relatively well-off country. Ethno-linguistic issues also come into play. Even the common languages of Caprivi and Namibia proper have failed to coincide. As Mike Nyendwa explains, English and Silozi prevail on the Strip, whereas in the rest of the country Africaans and Ovambo (Oshiwambo) are more important. (English, however, is spreading—it is Namibia’s official language—lessening this discrepancy.)

Caprivi’s tensions came to a head in 1998, when the government launched raids on alleged rebel camps. Mishake Muyongo, CANU founder and one-time SWAPO Vice President, fled to Botswana after being accused of leading a secessionist movement. In 1999, the newly proclaimed Caprivi Liberation Army (CLA) launched attacks against governmental institutions in the Strip. Namibia declared a state of emergency in the eastern Caprivi and attacked rebels and their suspected followers. Such actions seem to have been successful. Although an independent “Itengese Nation” was declared in 2002, it has achieved little if anything, and the CLA has apparently vanished as a fighting force. Muyongo eventually gained asylum in Denmark. In Namibia, he and 131 other suspected CLA members have been charged with high treason; the complex trial is still ongoing. 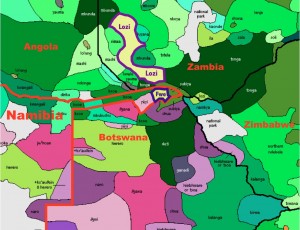 The Caprivi struggle has clear ethnic overtones. Most of those on trial belong to the small Mafwe group, with an estimated 10,000 members. The Mafwe complain of marginalization and loss of lands to the Masubia group. Yet it is not even clear who the Mafwe really are, as ethnic boundaries here can be rather vague. In 2004, such distinctions provoked a legal conflict surrounding the office of a traditional monarch, or tribal leader.* At that time, the Namibian government embarrassed itself by recognizing a second Mafwe tribal chief, a rival to the incumbent; the newly appointed leader claimed to represent the genuine ethnic group: “My people are the true Mafwe, they are the only ones who speak the language, nobody else.” The government tried to defuse the quarrel by acknowledging the followers of the upstart chief as a different people, the Mashi, coining the term from a local place-name. Objection raised to such a manipulation of ethnic categories were to no avail; a spokesman for the Namibian Ministry of Regional and Local Government admitted that “historically [he is] correct, they are the true Mafwe,” but “because we already have a Mafwe traditional community, we can’t recognise them as such… it’s an unfortunate situation which we have to live with.”

If Mafwe dissatisfaction has played a role in the Caprivi struggle, the larger ethnic issue stems from the historical legacy and contemporary grievances of the Lozi, a much more numerous and historically significant people. That story, however, is the topic of the next post.