Peace Between Sudan and Chad? 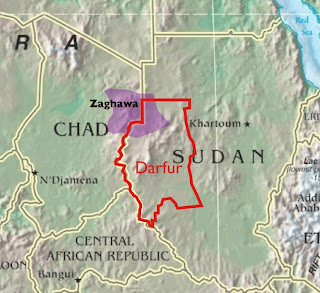 On February 9, 2010, the leaders of Sudan and Chad agreed to quit supporting rebel movements in the other’s territory, thus promising to end one of Africa’s proxy wars. They also pledged to discuss mutual development projects along the war-ravaged border. Such initiatives could diminish tensions in western Sudan (Darfur) and adjacent areas in eastern Chad. Caution is warranted, however; earlier thaws have not lasted. Chad broke diplomatic relations with Sudan in 2006, then restored ties with fanfare later that year. But in 2007, after defeating a raid by Sudan-based rebels, Chad reportedly sent eight tanks and 100 other military vehicles into Sudanese territory. In 2008, Chadian president Idriss Déby again lashed out against “mercenaries directed by Sudan” who had advanced across the country to the capital city of N’Djamena before being routed. Skeptical observers suspect that the new agreement is based more on the two governments’ desire to firm up local support before scheduled elections than on any deep-seated desire for peaceful relations. 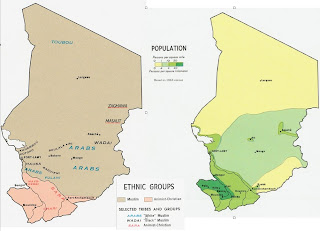 The tensions between Chad and Sudan are linked to their ethnic geographies. Of critical importance are the Zaghawa, an historically powerful linguistic group whose territory spans the border. In Sudan, the Zaghawa — like other non-Arabic-speaking peoples of Darfur — have been victimized by the Sudanese government and its allied Arab militias, the infamous Janjaweed. The Sudanese Zaghawa generally support the insurgent Justice and Equality Movement (JEM), a moderately Islamist organization, supplying most of its leadership. In Chad, the Zaghawa politically dominate the entire country, even though they are a relatively small minority living far from the core area of the south- and center-west. Chadian President Déby and most of the country’s other top officials are Zaghawa. It is thus not surprising that they would support Zaghawa rebels on the other side of the border.

Overall, Sudan and Chad are structured along similar ethno-geographical lines. Both have Muslim majorities living in the arid northern and the semi-arid central regions, and substantial Christian and animist minorities inhabiting the humid southern areas. Likewise, their Muslim populations are divided between Arabic speakers and peoples speaking a variety of African languages, mostly in the Nilo-Saharan family. As is apparent in the map above, local Arabs are often classified as “White,” in contrast to the “Black Africans” who speak indigenous languages. In actuality, a long history of intermarriage has reduced color differences, especially among the Shuwa (or Baggara) cattle-herding Arabs, often to the vanishing point.

While the overall ethnic structures of Chad and Sudan are similar, the demographic specifics are markedly different. In Sudan, Arabs constitute a plurality of some 40 percent; living in the core regions of the country, they have long dominated its political and economic structures. The Arabs of Chad, by contrast, form only about 15 percent of the population, and live mostly as migratory pastoralists with little power. They have suffered some persecution in recent years, largely because local villagers and troops often unfairly associate them with the brutal Janjaweed militias of Sudan (see “Arabs Face Discrimination in Chad,” Stephanie Hancock).

Chad has been so rent by ethnic divisions, poverty, and inadequate infrastructure that its government has barely managed to survive. Déby maintains power in the face of numerous insurgencies in good part by relying on the force of the 1,000 or so French troops currently stationed in the country. But oil revenues have been pouring into Chad since 2003, giving the government increasing scope for action. Most of the funds from the oil industry were supposed to be set aside for educational and other human development projects, but in 2006 Chad’s government backed out of the U.N.-brokered agreement. In 2009, Transparency International rated Chad as the word’s sixth most corrupt country. Sudan was ranked even lower, just three slots above last-place Somalia. Under such conditions, a durable peace seems unlikely.