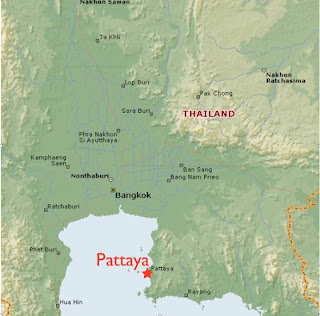 The three maps of U.S. foreign military bases posted in Geocurrents yesterday all show an American military presence in Thailand. The contingent exists but is tiny, amounting to 113 troops in the U.S. Embassy in Bangkok. The force is designed “not only to promote the initiatives and interests of the United States, but also to report and assess any concerns, political or otherwise, in the country.” The American military also periodically engages in joint exercises with the Royal Thai Army and Navy, most recently in 2010.

In the 1960s and early 1970s, the story was different. The U.S. air war in Vietnam essentially operated out of Thailand; many more American Air Force personnel were based on Thai territory than on Vietnamese. Even then, the U.S. did not officially maintain Thai airfields. Local officers remained officially in charge, with a so-called gentleman’s agreement allowing effective American control.

U-Tapao airbase, 90 miles (140 km)southeast of Bangkok, hosted the U.S.’s B-52 Staratofortress bombers and their pilots. American servicemen found a local “rest and relaxation” center in Pattaya, a nearby fishing village with a great beach. Businesses soon sprang up to cater to their desires. Bars and brothels multiplied.

When the war ended in the mid-1970s and the Americans departed, Pattaya took an economic hit – but not for long. Civilian tourists began to flock to Thailand in the 1980s, many seeking commercial sex. Capitalizing on its go-go bars and massage parlors—as well as its transportation infrastructure and natural amenities—Pattaya became a major destination. By 2008, it was attracting a whopping 4.4 million international visitors a year: more than Cairo, Beijing, San Francisco, Tokyo, Orlando, or Vienna.

A casual perusal of the Wikipedia article on Pattaya might lead one to think that most foreign tourists come for shopping, swimming, or festivals. The author eventually allows that “Pattaya has derived part of its reputation as a tourist destination due to the sex industry and the resulting wild nightlife, and in many ways the city has become what it is now because of this.” The admission is an understatement; commercial sex is to Pattaya what gambling is to Las Vegas or Macao. To appreciate the magnitude of prostitution in Pattaya one need only search the city on the internet.

Like its clientele, Pattaya’s workforce is international. Thailand’s poor and mostly Lao-speaking Isan region in the northeast is the main source, but Pattaya also employs thousands of foreign sex-workers. Burmese and other poor Southeast Asians are found at the lower economic end of the trade, and in child prostitution; exploitation in this sector is especially severe, with human trafficking linked to the heroin and meth trade in northern Southeast Asia. At the upper end, Russian and East European women are common. Trafficking here is linked to the Russian mob.

If Russians were first attracted to Pattaya for the sex trade, they evidently found much to admire in the area. The city has become a popular winter resort for the elite, drawing more than 800,000 Russian visitors a year. Pattaya even supports a Russian circus. Russians have also been purchasing property and establishing residency. In 2008, one realtor was quoted as saying, “I think this year, Russians will account for 40 per cent of property sales in Pattaya.”

Local officials are certainly concerned about the criminal activities of the Russian mob, but they embrace Russian tourists and their money. As Pattaya People reported in October, 2010: “On Friday afternoon, at the Diana Garden Hotel, North Pattaya, the Deputy Governor of Chonburi Mr. Songpon Jampapan started the “Russian Language Training Program for Boosting Long Term Tourism,” in cooperation with Pattaya City Hall …. This training program aims to help small and medium businesses to communicate with Russian tourists, to help the tourist business, and build good relationships between the 2 countries.”