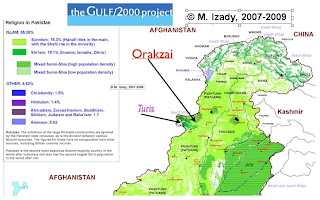 Today’s New York Times includes three important articles pertaining to Sunni/Shiite tensions. Two of these are all-too-typical reports of terrorist attacks on Shia pilgrims by Sunni extremists, one in Karachi, Pakistan, the other in Iraq. The third article, on new leadership emerging among the Pakistani Taliban, is much less conventional (“With Taliban Leader Reported Dead, New Pakistani Figure Emerges”). According to the article, the local Taliban center has been relocated to Orakzai, one of the agencies of Pakistan Federally Administered Tribal Areas (which are not “federally administered,” if administered at all). The article mentions the fact that Orakzai has a Shiite minority, and that Taliban militants treat Shiites with particular brutality. What the article does not mention is the fact that in neighboring Kurram Valley Agency, Shiism is much more prevalent, being the dominant faith of the Turi tribe. Not surprisingly, the Turi have been struggling against the Taliban. As the Wikipedia reports, “On August 31, 2008 tribesmen mostly Turis dislodged Taliban from nearly 200 villages … [the] Taliban headquarters at Bagzai fell to the tribesmen killing as many as 95 militants.” (http://en.wikipedia.org/wiki/Kurram_Valley#cite_note-6).

The Pashtun Shiites have received little notice in the global media, but they are an important element of a very complex war.