The changing political orientation of the American suburbs has emerged as a major topic in recent electoral analysis. As a 2019 New York Times headline asked, “Are the Suburbs Turning Democratic?: The Political Dividing Line in America Used to Be Between Democratic Cities And Republican Suburbs; Now It Runs Through the Center of the Suburbs Themselves.” As this article correctly notes, since 2016 inner suburbs have generally moved in a Democratic direction, whereas outer suburbs have remained in the Republican camp. Just this week, the New York Times ran another headline proclaiming, “Democrats Retained Their Grip on Diversifying Suburbs: Modest Gains by GOP Can’t Reverse a Trend That Started In 2018.” Although the article contains some insightful analysis and is accompanied by two revealing maps (posted below), the implications of the headline are frankly bizarre. It implies that the authors can predict the future of electoral geography in the United States based on their analysis of recent trends. Such trends, as we all know, can pivot quickly. As recently as 2010, Newsweek ran a headline reading, “Dems Lose Grip on Crucial Suburbs,” with the article noting that, “When Long Island flipped from red to blue in recent years, Republicans looked unlikely to ever win another statewide election.”  Long Island, however, has flipped back and forth several times since this article was published. 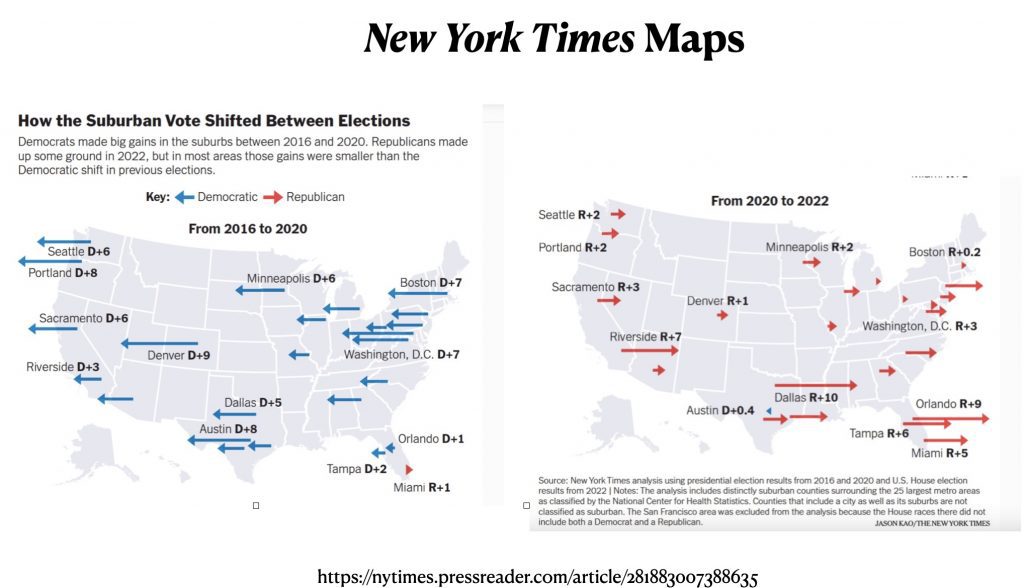 The most recent New York Times headline, with the crucial word “diversifying,” might also be read as an implication that ethnic and racial diversification will determine the outcomes of future elections in American suburbs. This “demography is political destiny” thesis implicitly rests on the earlier works of Democratic analyst Ruy Teixeira, particularly his co-written 2004 book The Emerging Democratic Majority. Teixeira, however, has largely repudiated these ideas, based on his detailed demographic analyses of recent elections. He shows that minority voters, particularly Hispanic ones, have been drifting away from the Democratic Party, and he argues that this shift will likely continue unless the Democrats alter some of their positions, particularly on social and cultural matters. A recent article by Teixeira interprets suburban voting trends quite differently than the New York Times does. As he writes:

And just how much hold do the Democrats have on suburban voters anyway? In the AP/NORC VoteCast survey, the most reliable election survey available, Democrats carried suburban voters nationwide by a single point in 2022. That’s a slippage of 9 points from the Democrats’ 10 point margin in 2020. Interestingly, the slippage in Democratic support from 2020 to 2022 was actually larger among nonwhite than white suburban voters. These data indicate strongly that Democrats might not be in quite the catbird seat they think they are with suburban voters and therefore with the 2024 election. But they appear to have a touching faith that the anti-MAGA playbook will work anytime anywhere.

As both Teixeira and the New York Times writers fully understand, the American suburbs are by no means electorally uniform. One major discrepancy, highlighted by the Times, is that between New York and Philadelphia. In the 2022 election, the modest red shift in the Philadelphia suburbs was not enough to make up for a more substantial blue shift in previous elections. In the New York suburbs, on the other hand, “the four point shift towards the Democrats in 2020 was more than undone by the five point swing toward the Republicans in 2022.”

The 2022 shift toward the Republicans in the New York metropolitan area occurred in both suburban and urban districts. In the the 2022 New York State Assembly election (second map posted below), the shift in the Republican direction was been more pronounced in the outer boroughs of the city than in the Long Island suburbs. 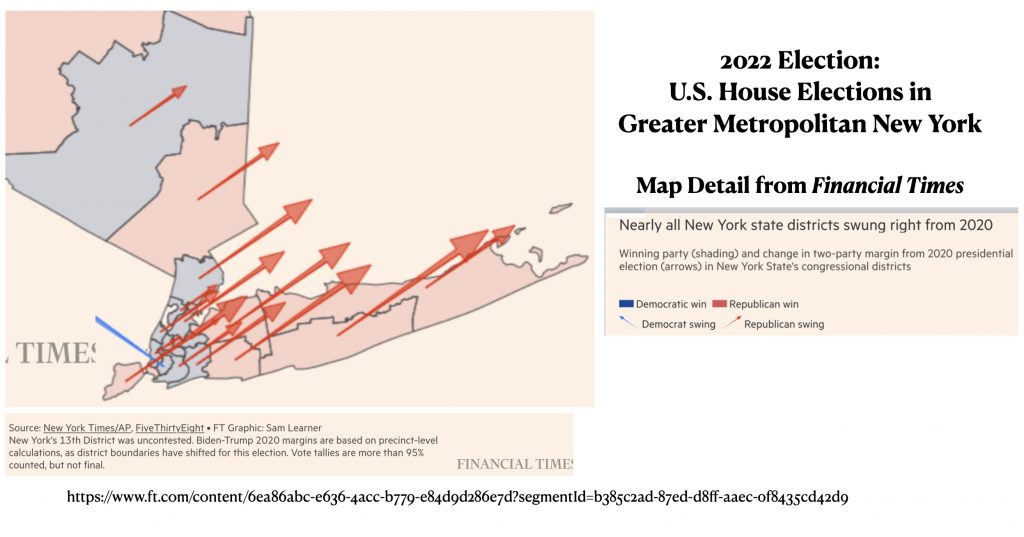 The New York Times attributes the Republican gains in the New York suburbs to two main factors: “governor Kathy Hochul proved a weak Democratic standard bearer … while Republicans mounted a visceral campaign assaulting Democrats over crime.” While rising crime was no doubt an important issue in the New York election, one must ask why it was not equally important in the Philadelphia metropolitan area. Violent crime, after all, has risen more in Philadelphia than in most other major cities. Why then would Republicans be able to capitalize on this issue in New York but not in Philadelphia? Perhaps one factor is the more prominent role of the tabloid press in the former area (particularly the New York Post), which reports extensively on crime. Comments from readers who have more knowledge of these two metropolitan areas would be highly welcome.