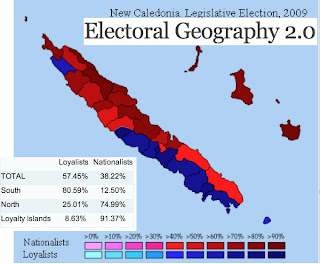 Yesterday’s post referred to the French-controlled island of New Caledonia as a “nano-continent.” Owing in part to its continental origins, New Caledonia is classified as a biodiversity “hotspot” by Conservation International, noted for its large number of threatened endemic species. New Caledonia also occupies a unique position in terms of human geography. Its official status is that of a “sui generis collectivity” of France, sui generis being the Latin term for “of its own kind.”

European imperial holdings have often been divided into two categories: “settler colonies,” in which immigrants from Europe became the dominant population, and “colonies of occupation” in which small numbers of Europeans came, usually on a temporary basis, to rule and extract profits. The distinction is not entirely clear-cut, as some colonies that experienced large-scale European migration retained an indigenous majority (South Africa), whereas in others most settlers eventually left, often involuntarily (Algeria, Kenya, and Zimbabwe). New Caledonia, however, remains uniquely in the middle, partly a settler colony and partly an occupation colony. Today, the indigenous Kanaks comprise some 45 percent of its population (which totals 250,000), while people of European descent account for some 35 percent. Roughly 12 percent are migrants from French-ruled Polynesia, particularly Wallis and Futuna. Today, roughly 16,000 Wallisians reside in New Caledonia, whereas only 10,000 remain on the home island of ‘Uvea (or Wallis). Relations between the Wallisians and the indigenous population are generally tense, having boiled over into bloodshed in 2002. 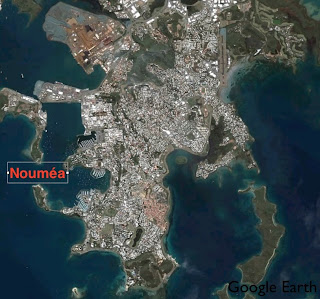 The indigenous population of New Caledonia is itself ethnically diverse, divided into more than 30 linguistic groups. Conflicts with European and Polynesian migrants, however, have helped unite the indigenes into the singular Kanak ethnic group. (The term Kanak oddly stems from a Hawaiian word that was used by missionaries and traders through much of the Pacific.) Resisting French rule and racial regulations, and angered by continuing immigration, the Kanaks launched an insurgency in 1980s. Peace came with the Nouméa Accord, signed in 1998. This agreement gave increased autonomy to New Caledonia as a whole while institutionalizing power sharing between the Kanak community and non-indigenous population. The Nouméa Accord also promises a referendum on independence, to be held between 2014 and 2019. Currently, the process of devolution continues to unfold. On February 26, 2010,Radio New Zealand announced the arrival of the French education minister in New Caledonia to discuss transferring responsibility for secondary education from Paris to the local authorities. France has also recently allowed the New Caledonian census to include questions about ethnic identity, a forbidden topic in France itself. 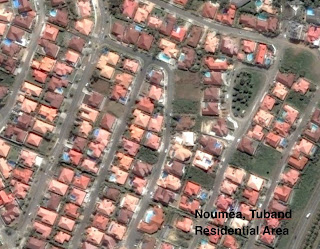 Many people of European descent have lived in New Caledonia for generations, and hence view themselves as Caldoches, members of an ethnic group that is often compared with South Africa’s Afrikaners. Relatively conservative and worried about the empowerment of the Kanaks that may accompany independence, Caldoches generally vote for “loyalist” parties that want to maintain ties with France. As the map above shows, voting remains highly polarized, with the heavily indigenous districts in the north and east voting strongly for nationalist (pro-independence) candidates. A number of European and Polynesian leaders, however, have been striving to create a new political party, called “Future Together,” that would strive for multi-ethnic inclusion, but the process has not been easy.

New Caledonia is a prosperous land, benefitting from massive deposits of nickel (25 percent of the world’s total) and other mineral resources. Its per capita GDP is well over $15,000, a relatively high figure. The distribution of wealth, however, is highly unequal, concentrated in the European-dominated areas on the drier southwestern side of the main island. As the Google Earth images of Nouméaposted above show, the capital city is well appointed, allowing a segment of the population to live very well indeed. And as is true in other French overseas territories, the cost of living is extremely high, adding to the discontent of the indigenous population. Although New Caledonia has been relatively stable in recent years, troubles may reignite as the independence referendum approaches.