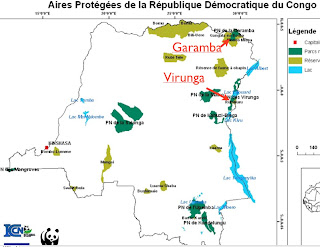 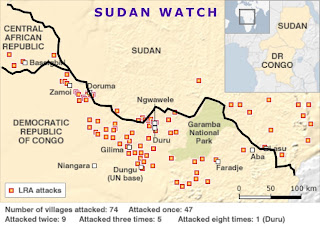 Despite its poverty, lack of infrastructure, and interminable wars, the Democratic Republic of Congo has admirably tried to salvage its national park system and preserve its wildlife. It has not been easy. Since 1994, an estimated 120 rangers have died trying to protect Virunga National Park alone. The existence of large wild areas in eastern DR Congo, moreover, generates its own problems. Guerilla leaders now use the parks as refuges for their own fighters, putting wildlife at increased risk and undermining the security of the region.

Virunga National Park in eastern DR Congo, established in 1925, was Africa’s first national park. Slightly smaller than Yellowstone, it is – or was – noted for its forest elephants, okapis, hippos, and especially its gorillas. The seemingly endless war has taken its toll: 95 percent of Virunga’s hippos have supposedly been slaughtered since 2006. Dauntless efforts by rangers kept the park’s gorillas relatively secure until the Hutu militia, called the Democratic Forces for the Liberation of Rwanda (FDLR), began hiding in the park. In 2007, forces of the Tutsi-oriented, anti-FDLR militia led by Laurent Nkunda invaded the park, seized its headquarters, and expelled its rangers. In 2008, however, Nkunda allowed the rangers to return, and even began talking about protecting Virunga and developing a tourist destination. Rwanda’s arrest of Nkunda in early 2009, part of a complex deal between Rwanda and DR Congo aimed at uprooting the FDLR, put Virunga’s wildlife in renewed jeopardy.

The situation in Garamba National Park in northeastern DR Congo is more dire still. Garamba, established in 1938, was best known as the last remaining holdout of the northern white rhino. In January 2009, the park headquarters were attacked by the brutal Ugandan rebel force known as the Lord’s Resistance Army. The LRA bizarrely combines Acholi nationalism (focused on an ethnic group in northern Uganda) with a religious hybrid of indigenous beliefs and Christianity. The LRA, as infamous for its use of child soldiers as for having displaced some 1.6 million persons, uses the park as a sanctuary, from which it terrorizes a broad swath of land extending across several countries. Uganda, Sudan, and DR Congo tried to dislodge the LRA from the park later in 2009. The resulting “Operation Lightning Thunder” was not successful; rebel reader Joseph Kony eluded capture, and the LRA retaliated by mutilating and killing over a thousand local civilians.

Optimistic reports have recently been coming out of eastern DRC, claiming that mediation is working and violence is on the wane. “Normalcy Returns to Eastern DR Congo: Mediators,” reads a January 25, 2010 headline in China’s People’s Daily Online. One week later, the UN News Centre reported that the LRA had just slaughtered 100 civilians in the Congolese village of Magamba. Optimism may be comforting, but in the DR Congo it is generally misplaced.