“Misled by the Map”—video lecture 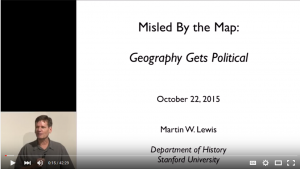 One of the main concerns of GeoCurrents is the thesis that the basic political map of the world, focused as it is on mutually recognized sovereign states, is a misleading document. This map purports to depict the existing global political configuration but does not actually do so. Instead, it essentially shows the world as it should be, according, that is, to the foreign-policy establishment. Western Sahara, for example, appears as a country on almost all political maps—except those made in Morocco— even though it has never actually been an independent state and in all likelihood will never be one. Diplomatic pretense, on other words, habitually trumps geopolitical reality in our most basic depiction of the world.

Numerous GeoCurrents posts over the years have pointed out many of the failures of the standard political map. I often feel, however, that this topic deserves more concerted attention. I have therefore contemplated writing a book on the topic, but to do so I would probably have to quit writing GeoCurrents posts or take a leave of absence from teaching, neither of which I am willing to do. But I have been able to give extended consideration to this topic in the form of an illustrated lecture, given under the auspices of the Stanford University alumni program. This lecture was recorded and has been put up on the internet. It is also available for viewing below. Many thanks to Stanford for hosting this lecture and especially for making it available to the public.

(Video and audio recordings of other talks and lectures can be found here.)