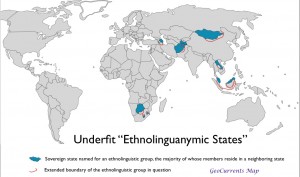 Last Saturday’s post on “ethnolinguanymic states” generated pointed criticisms, especially from Maju, whose frequent comments on GeoCurrents are much appreciated. I realized afterward that the main problem was a lack of clarity in the initial post. The ultimate point was not to argue that “ethnolinguanymic” countries (those whose names incorporate the names of their main language) should be regarded as solid nation-states, with a close match between state boundaries and national identity. If anything, it was to argue the opposite: although ethnolinguanymic states might seem to form solid nation-states, reality is often quite different. Hence the framing of the concept in the English language: I am interested here primarily in misconceptions that I commonly see circulating in the English-language media and among my English-speaking students.

The case of Spain, discussed intensively in the GeoCurrents forum, illustrates the central issue well. American students generally expect to find a high degree of linguistic commonality and national solidarity in Spain, assuming that virtually all citizens of Spain are Spanish-speakers Spaniards who identity themselves as such. But that is not the case, given the strong sense of separate national identity found among the Catalans and Basques, and to some extent the Galicians as well. In my experience, students who have spent time in Barcelona or the Basque country participate enthusiastically in classroom discussions on this topic, often stressing how surprised they were to find such strong anti-Spanish-national sentiments in these areas.

The identification of the Spanish (or Castilian) language with Spain is further challenged by the fact that most native Spanish (or Castilian) speakers reside not in Spain but in Latin America. Ibero-Americans, of course, do not identify themselves with the Spanish nation. In general terms, national identity in the Western Hemisphere did not develop on ethnolinguistic grounds, although in the officially “plurinational” state of Bolivia, current-day “nations” are defined on such a basis.

In the Eastern Hemisphere, several “ethnolinguanymic” countries are potentially challenged by the fact that a higher percentage of the people in the ethnolinguistic group on which the state is supposedly founded live in a neighboring country, a phenomenon introduced in a previous GeoCurrents post under the label of the “underfit nation-state.” Each case has its own complexities and deserves a post of its own. For the sake of simplicity, I will note here only that more Mongols live in China (mostly in “Inner Mongolia”) than in Mongolia itself, more Lao live in Thailand than in Laos (to the extent that Isan is synonymous with Lao), more people who speak Malay as their mother tongue live in Indonesia than in Malaysia, more Azeris (or Azerbaijanis) live in Iran than Azerbaijan, and more Southern Sotho speakers, Swazi speakers, and Tswana speakers live in South Africa than in Lesotho, Swaziland, and Botswana respectively. 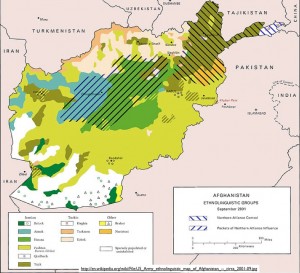 Afghanistan is doubly compromised on this score. “Afghan” is generally taken to be synonymous with Pashtun (or Pakhtun, in the “hard” dialect of the Pashto language), yet more Pashtun people live in Pakistan than in Afghanistan. By the same token, more members of the Tajik ethnic group live in Afghanistan than in Tajikistan. The latter imbalance is even more striking if defined on strictly linguistic grounds. The Tajiks of Tajikistan supposedly speak Tajik whereas those of Afghanistan supposedly speak Dari, but Tajik and Dari are merely different names of the same language. Two other major ethnic groups of Afghanistan, the Aimaks and Hazaras, also speak Dari, and Dari has long been the prestige language as well as the main language of inter-ethnic communication across the country. Taken together, Afghans who speak Dari probably outnumber those who speak Pashto, perhaps by a substantial margin. And to add to the confusion, Dari itself is a dialect of Persian, inter-intelligible with Farsi as spoken in Iran. In fact, as stated in the Wikipedia, “native-speakers of Dari usually call their language Farsi. However, the term Dari has been officially promoted by the government of Afghanistan for political reasons…” 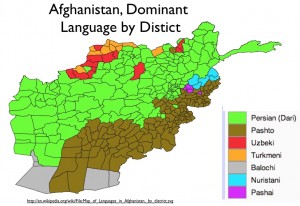 Afghanistan is thus merely a seeming ethnolinguanymic state; in actuality, the name of the country does not follow the name of the majority ethnolinguistic group, as the country has no majority population. And as we shall see in the next GeoCurrents post, the identification between the term “Afghan” and the modern country called Afghanistan is further challenged by geo-historical considerations.