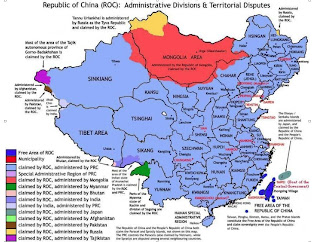 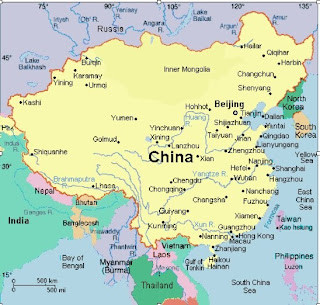 As noted yesterday, Taiwan is recognized as the legitimate government of “China” by some two dozen countries. Most are small states in the Pacific, the Caribbean, and Central America. Taiwan has had no success in securing or maintaining recognition by other Asian countries. Most Asian states are too large to be swayed by aid incentives—and too close to China to deny Beijing’s power. But Taiwan is also disadvantaged in its quest for recognition by the fact that it claims not just the whole of China but parts of Russia, Tajikistan, Pakistan, India, Afghanistan, Bhutan, and Burma – as well as Mongolia in its entirely (see map). Officially, Taiwan maintains that all territories controlled by China at the time of the 1911 revolution are rightfully its own.

Despite its formal claims, Taiwan has bent to the demands of reality to recognize Mongolia’s independence. In 2002, it opened an informal embassy in Mongolia, officially called the “Taipei Trade and Economic Representative Office in Ulaanbataar.” It simultaneously excluded Mongolia from the purview of its Mainland Affairs Council, in effect recognizing Mongolia’s sovereignty. As a result, Mongolians wanting to visit Taiwan now have to obtain visas, which were not necessary so long as Taipei regarded Mongolia as one of its (temporarily) lost provinces. Still, Taiwan has never formally dropped its constitutional claims to Mongolia. The situation remains ambiguous to say the least.

Nonetheless, Taiwan and Mongolia have developed reasonably close relations. As a sign of friendship, Taiwan recently gave Mongolia a three-story high portrait of Genghis Khan, made out of 437,000 mosaic tiles, based on a rare portrait of the world-conqueror held in Taipei’s National Palace Museum. But the potential for discord has not vanished. In 2008, a Hong Kong-based company posted a map on its website showing Mongolia as part of China (see map above); when Mongolia protested, China’s embarrassed government responded by claiming that the original map had been made in Taiwan. Whatever its provenance, the cartographer who made this map was geographically challenged. The label attached to the independent country reads “Inner Mongolia,” which actually refers to an autonomous region within China itself, rather than “Outer Mongolia,” the term that was used for Mongolia proper when it was part of the Chinese empire.